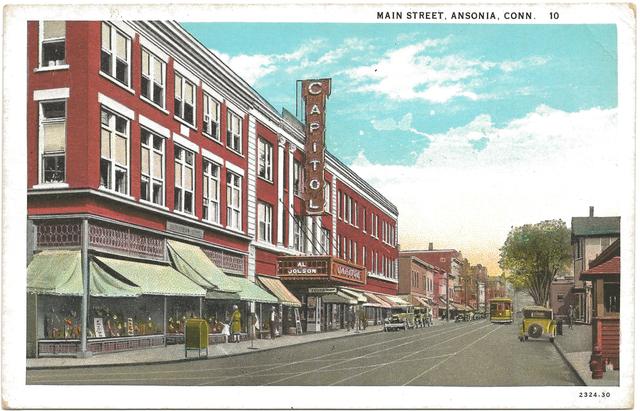 The Capitol Theatre was opened December 28, 1920 on Main Street in Ansonia. By 1941 it was operated by Warner Bros. Circuit Management Corp. It appears that, while the building that housed the lobby still stands, most of the auditorium was demolished to build senior homes.

My Grandfather managed the Capitol theater for many years. I saw my very first movie there when I was four years old. It was “Sleeping Beauty.” My mother had one of the gilt mirrors from the theater hanging in our upstairs hallway for many years and had a couple of the original straight-back chairs. She also has photographs of my grandfather with some of the performers and an article from the newspaper about the theater and my grandfather when George Gershwin used to play the piano (before he was famous) in between Vaudeville skits.

This is just down the street from the Ansonia Opera House. The railroad (Waterbury to Bridgeport) runs just behind the building. From the side of this building you can see the lobby is all that remains while a similar shape but different facade is the new senior housing. Standing in front but walking around to the right, you’ll see the Water Street Sports Cafe on the right. Turn to the left and you’ll see a small doorway in the brick entranceway between the lobby and former auditorium. This hallway is a small parklike feature to the area with some benches and goes through to the other end. There are 2 fiberglass portals on the front of the building.

Here are a couple of links regarding my grandfather and the Capitol Theater:
View link
View link

From the 1930s a postcard view of Main Street and the Capitol Theatre in Ansonia.

Just thought I’d add my 2 cents, and clear up some things.

The Capitol Theatre lobby was in the ‘Capitol Building" facing Main Street. It is a long building that has (had) stores on the first floor, and offices on the second floor. Water St., to the North was the end of that building.

There were two (2) separate buildings comprising the entire ‘Theatre’.

The ‘Theatre’ itself (which was very ornate, with fresco paintings on the ceilings & walls, and a large balcony, and box seats on the sides) was in a separate building that is now Senior Housing, and the Senior Center, on West Main St.
This building also bordered on Water street. You could walk down an alley on Water Street to get to the side entrance of the theatre. That entrance is now used as a side entrance to the Senior Center.