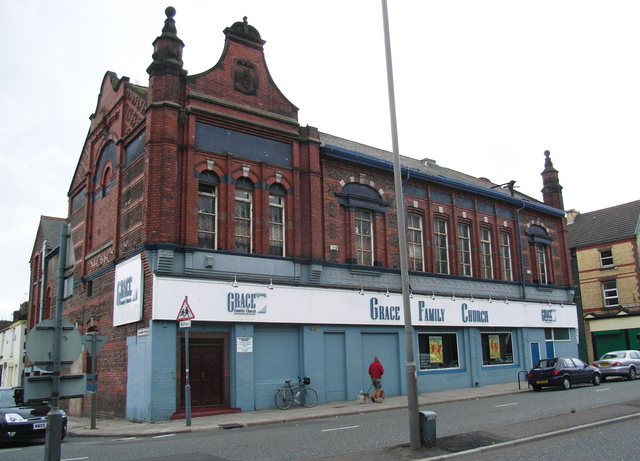 Located in the south Liverpool district of Aigburth. The Sefton Park Assembly Rooms was built in 1889. In 1906, the 1st floor upstaires was converted into the Aigburth Assembly Picturedrome, which seated 300 on long wooden forms.

In December 1923, it was reconstructed internally to the Rivoli Theatre, with seating provided for 602 in stalls and circle levels. It operated first as a variety theatre, then a straight playhouse from 1925.

It was taken over by the Denman Picture Houses Ltd. chain, a subsidiary of Gaumont British Theatres(GB) in May 1928.

It was closed by the Rank Organisation (Circuits Management Association) on 5th January 1957 with Robert Ryan in “Back to Eternity” and Dale Robertson in “The High Terrace”.

It was purchased by the nearby St. Charles Catholic Church and became a church hall. They sold it in the 1970’s and it became a kitchen equipment centre. In 1994, it became the Grace Family Church

In February 2015 a mystery worshipper visited this church and compiled a report for www.ship-of-fools.com. The visitor gives a description of the building today and its furnishings and seating capacity, accurately dating it to 1889. He found the Evangelical Alliance a lot noisier than we suppose it was as a cinema!