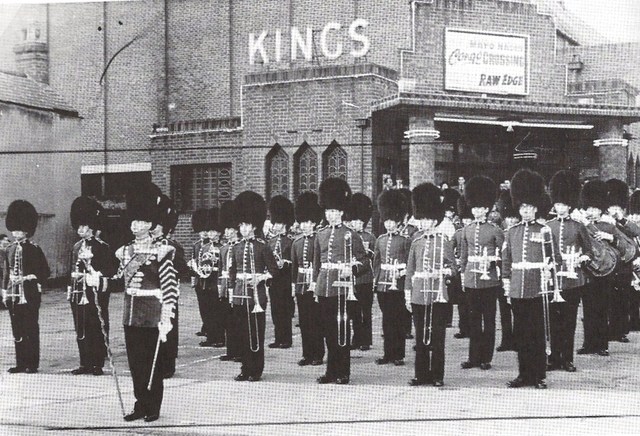 Located in Stourbridge, Worcestershire, to the west of Birmingham. The building was opened on 23rd October 1909 as a roller skating rink. It was taken over by the Pooles family of Gloucester and converted into a cinema, opening on 6th November 1911 as the Kings Hall. Seating was provided for 1,500 in stalls and circle levels. In July 1929 it was equipped with a RCA sound system, and the first talkie to be screened here was “In Old Arizona”.

The Kings Super Cinema was opened on 9th September 1939 with Shirley Temple in “The Little Princess”. It was designed by local Stourbridge architect Stanley Griffiths. The interior decorations were carried out by Kenneth Friese-Green. Seating was provided for 1,800 in stalls and circle levels. The proscenium was 35 feet wide and the stage was 23 feet deep.

The Kings Super Cinema was equipped with CinemaScope on 6th September 1954. On 1st October 1956, it was purchased by the Rank Organisation (Circuit Management Association). Their ownership was brief, as the Kings Super Cinema was closed on 22nd June 1957 with Michael Redgrave in “Time Without Pity” and Audie Murphy in “Fort Petticoat”. The Rank Organisation blamed the closure on the Government’s high Cinema Entertainment Tax.

The building was sold to a coach hire firm, Samuel Johnson, but they only used the cinema car park. The building eventually became a furniture store, and finally a DIY hardware store before it was demolished in April 1984.