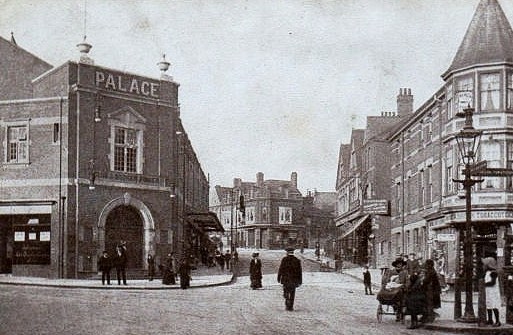 Located in Wellingborough, Northamptonshire. On the site was originally the Central Rink, a wooden structure built for roller skating in 1908. In mid-1910, it was converted into the Empire music Hall, with around 1,000 seats. It had a short life as it was destroyed by fire on 17th November 1910.

The Palace Theatre was soon built on the site and opened on 23rd October 1911. It had a 25 feet wide proscenium and a 35 feet deep stage. Charlie Chaplin appeared at the Palace Theatre as part of the Fred Karno company, and the theatre presented films as part of the variety programme. By the 1920’s it was operating as a full time cinema.

The Palace Cinema was equipped with a Western Electric sound system in 1930 and the first talkie to be screened was Maurice Chevalier in “Innocents of Paris”, and it operated as a cine/variety house through the 1930’s. It was equipped with CinemaScope in 1955, and the first film to be screened in this process was Dorothy Dandridge in “Carmen Jones” on 29th August 1955.

In mid-1968 it was taken over by Leslie Jaffa’s Orange Group Management, who built two mini cinemas one above the other on the former stage, but these plans were not carried out. Instead, the former circle became the 464-seat screen 1. Screen 3 with 166-seats opened in the rear stalls on 25th July 1979 and screen 3 seating 192 in the former front stalls opened in December 1979.

In 1982 it was taken over by independent operators on a thre years lease, and screen 1 was closed and converted into a snooker club and bar. Screens 2 & 3 continued to operate as cinemas. In 1987, more alterations were carried out to the former circle area, and in the 1990’s the two operating screens were taken over by the Robins chain of cinemas. These continued to operate into the late-1990’s.

Today, the snooker club still operates in the former circle are, while the former stalls is now a bar operated by the Smith & Jones chain of pubs, and named ‘The Cutting Room’.