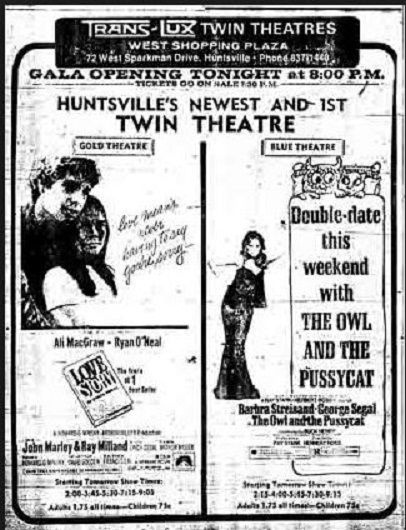 The Trans-Lux Twin opened on Friday December 25, 1970. It was Huntsville’s first twin theatre. The auditoriums were referred to as the Gold and Blue theatres. John McNamara & Assoc. was the architecual firm for the theatre. Opening movies were “Love Story” & “The Owl And The Pussycat”.

The theatre later became a three screen and reopened on Friday November 14, 1980 wtih “Galaxy Express”, “The Deadly Angels” & “Gloria”. The theatre went from Trans-Lux to Consolidated Theatres and finally Cobb Theatre as operators. The Cobb Movies 3 closed on February 28, 1993.

The building was gutted and became an Old Country Buffet later Hometown Buffet and then an Italian restaurant called Papa Lovetti’s.

Any additional information on the Cobb Movies 3 would be appreciated.