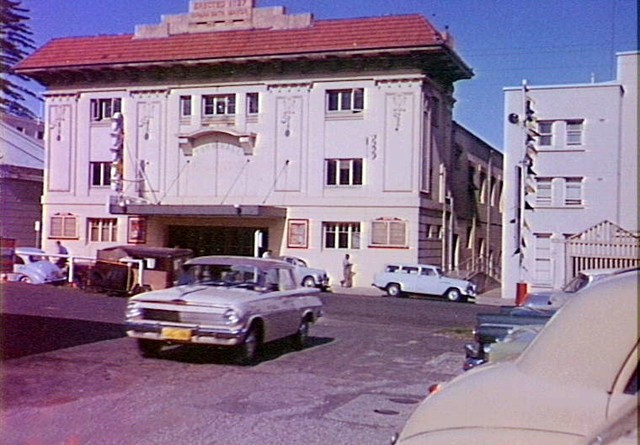 Wollongong is a port city about 50 miles south of Sydney and is third largest in the state. The Civic Theatre began life in 1927 as an annex to City Hall, and while it was viewed as a community hall, council planned it with capabilities to show films.

The Wollongong Town Hall Cinema opened in December 1927 under the management of Mr. W Turnbull. Business was severely cut by the depression and a year later the lease was given to Union Cinemas. They too ran into financial trouble and the lease was acquired by Wollongong Theatres who operated two nearby theatres. It appears they wanted the theatre in order to close it and lessen their competition.

When the lease expired in 1938 the council sought active exhibitors and the successful bidders were Herbert and Emily Jones. Following some remodeling the theatre, now named the Civic Theatre, reopened in 1939. When Herbert died in 1943 Emily Jones took the reins and with her son ran a very successful operation.

In the 1950’s Wollongong Council saw a need for a venue that could attract large scale events and changed the lease to a week by week basis. Emily meanwhile built the Regent Theatre which finally opened in 1957. She ran both houses for another six years before the Civic Theatre reverted to the Council and showed its last films in December, 1964.

The building, greatly altered with a $5 million refurbishment, survives today as a cultural center.

Hell fancy me finding this: Every Saturday afternoon
I used to get 2/– for work at home then off to the flicks with my school GF S Burns my first tongue kiss, what a shock it was.