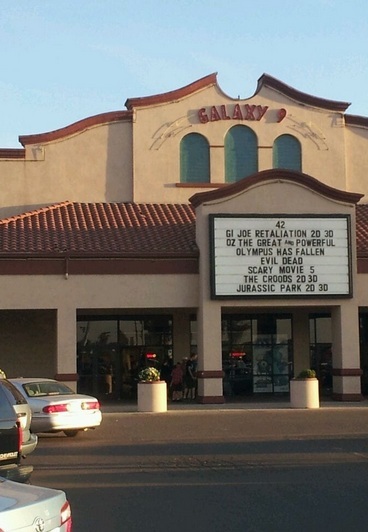 The 8-screen Galaxy 8 Theatres, Porterville opened in May of 1998 as the chain’s first theater. It gained an additional 400-seat screen in 1999. It has had all-digital projection since 2006.

The Galaxy Porterville originally opened as an 8-screen house. An additional 400-seat auditorium was added the following year. The theater was designed by the Estes Park, Colorado, architectural firm Thorp Associates, which has gone on to design a number of other projects for Galaxy Theatres.

Looks like this was perhaps started by Resort Theatres or Metropolitan? Looks identical to the theatres in Indio, Calexico, and the stalled project in La Quinta.

The Porterville, Indio, Calexico, and La Quinta theaters do all have a familial similarity, and I suspect that the connection is that they were probably all designed by Thorp Associates.

Thorp designed the Galaxy Porterville for Rafe Cohen’s newly-launched Galaxy Theatres chain, but prior to entering the exhibition business with this theater, Cohen had long been a developer of theaters that were operated by other chains. Metropolitan might well have been among those chains, and I believe that Resort Theatres was itself a subsidiary of Metropolitan.

The web site of Thorp Associates lists ten of its theater designs, and projects for both Galaxy and Metropolitan are among them, though none of the houses under discussion here are listed.

Thanks Joe. Great info. I wish I could make a giant “family tree” of the theatre biz. We are all so inbred, so to speak.

Grand opening as the Galaxy Theatres 8 Porterville in photos