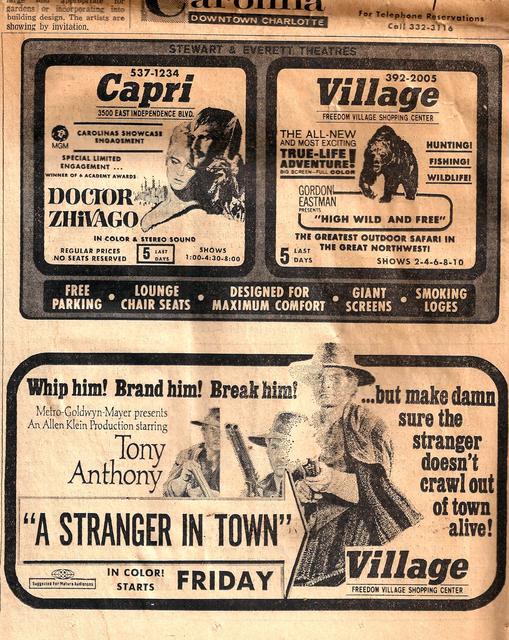 Located on Charlotte’s suburban West Side on Freedom Drive the Village Theater was next to the last of the single screen cinemas built in that city. The Village Theater was fairly basic inside and out and had some good first-run exclusives that brought in record crowds. It opened as Charlotte’s newest modern-ultra cinema on July 8, 1966 as a 800 seat single screener with “Battle of the Bulge” starring Henry Fonda. It was operated by Charlotte based Stewart and Everett Corporation which also operated the Capri Theater on Independence Boulevard that opened in 1964.

The Village Theater was twinned by 1978 when the original auditorium was given the split down the middle technique with shoebox auditoriums and smaller screens and renamed the Village 1 & 2 under Stewart and Everett. Carmike Cinemas took over this theatre in 1986 after its acquisition of Stewart and Everett. As a result the neighborhood surrounding the cinema declined as it went from showing first-run exclusives to becoming a second-run discount cinema under Carmike Cinemas that closed the Village Theater in 1989. The building still stands as a office complex and has been adapted inside for a variety of different uses over the years.

After additional research I found that the Village was not the last single screen cinema built in Charlotte. That distinction belongs to the Tryon Mall Theater which opened on March 24,1972 by ABC Southeastern Theatres.

Carmike Cinemas ran this theatre in the mid-1980’s as a 99-cent second run discount house from the buyout of Stewart and Everett in 1986 until its closing in 1989(by 1989,the Capri became a discount house with 99-cent pricing)under the titles AKA Village 1 & 2 and the Village Twin.

This theatre was equipped with “Century” JJ 70/35mm projectors along with 6 Track and 4 Track Magnetic Sound in addition to optical analog.

For Mike Rogers: The Village was twinned in 1978 when its 800 seat single screener was split into two sections with 400 seats each renamed the Village 1 & 2 under Stewart and Everett.

The Tryon Mall was twinned in 1974 under ABC Southeastern Theatres and reopened on Christmas Day of 1974.

The VILLAGE THEATRE opened on July 8,1966 with the premiere attraction “THE BATTLE OF THE BULGE” Starring Henry Fonda,Robert Ryan and Telly Savalas. Even though this movie was presented in Cinerama in 1966,the movie was a basic general engagement showing in the Carolinas. It was not a roadshow presentation when it played at this theatre nor it was not featured in Cinerama. The only theatre in the state of North Carolina that had three strip Cinerama projection was at Charlotte’s Carolina Theatre.

A lot of first-run exclusives brought in record crowds to this theatre,which was mainly known for its showing of Disney films and “B” movie releases.

The Village was the only theatre in the Carolinas that brought in record crowds for its showing of Ross Hunter’s AIRPORT that played here first-run in 1970 that held the all-time record attendance for such a movie in the greater Charlotte area that played here an astounding record of 27 weeks!

Other first-run exclusives including WALKING TALL in 1973 that played here for 23 weeks! Another record breaking attendance for a showing of a film in Charlotte.

It also held another record that brought in record crowds was the Village’s exclusive engagement of the 1977 re-issue of STAR WARS that played here on July 21,1978 that held it until August 22,1978.

This theatre was known for its showing of family films and Disney releases. I saw “THE CASTAWAY COWBOY” starring James Garner here in 1974. This was one of the worst Disney films ever made and the worst James Garner picture ever shown.

For a while, Carmike had their district office in this theater, until it moved to the Town Cinema Six near UNCC. I worked for Carmike back during that time and helped move the office furniture. I got to see the screens coming down and seats removed from the auditorium. It was a little sad since I had seen TRON there years prior. One of the old theater seats sat in offices of Town Cinema for quite a while. I’m sure it was taken by a manager at some point (or trashed). 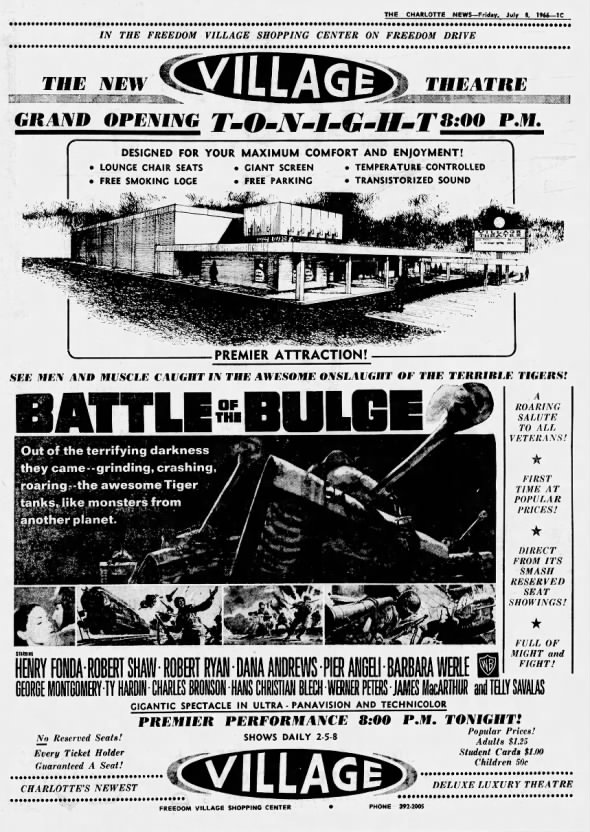