Previous Names: Scenes of the World 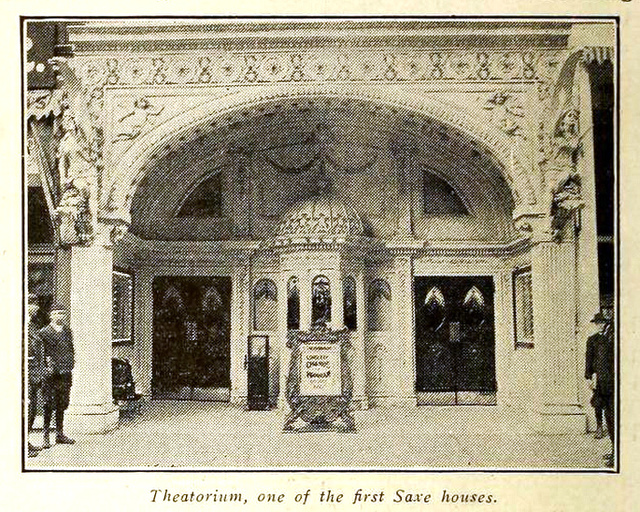 The February 4, 1923, Milwaukee Journal states that this was the first movie theater in Milwaukee.

It was on the Northeast corner of 2nd Street and Grand Avenue (I guess sometime Grand changed to Washington?). In 1860, the ground was occupied by the old Spring Street Church. This was torn down in 1872 to make way for the building the theater was in starting in 1906. The theater was started by Thomas Saxe, who along with his brother John E. Saxe founded Saxe Amusement.

Thomas Saxe conceived the idea of running a Hales Touring Car. He fitted up the Theatorium as a 40 seat mock railroad parlor car. The patrons sat on the observation platform and gazed at a sheet, which a man dampened with a hose so the picture would show through from the rear screen projection which had a crude sort of projecting machine. There was also a device by a lever, which caused the floor of the Theatorium to rock, vibrate, and tilt the car which made the patrons believe they were really viewing the landscape motion pictures from the rear of a moving train. This was the first picture show of any kind in Milwaukee.

“Hales Tours And Scenes Of The World”

Retired Kansas City Fire Chief George C. Hale, (October 28, 1849 - July 14, 1923) a well traveled and prolific inventor and mechanical engineer with an interest in use of film had a flair for show business. He had some help from William Keefe and Judge Fred Gifford. ‘Phantom Rides’ were seven to ten minute motion pictures depicting scenes from around the world filmed from the very front on the cowcatcher of racing trains played on the screen at the end of the car. 500 Hales Tours theaters were in the United States in 1907 including Coney Island, Brighton Beach, St. Louis, Chicago, New York. Overseas they were located in Mexico City, Havana, London, Paris, Berlin, Hong Kong, Melbourne, Mexico, Continental Europe, British Isles, Canada, South Africa, South America. By 1911 most theaters had converted to nickelodeons Anytime moviegoers are immersed in a new experience - CINERAMA, through digital sound or 3-D or rumbling theatre seats - it’s a testament to people like Chief Hale and his remarkable tours of the world.

Later Mr. Saxe installed nickelodeon equipment. Shows lasted 10 minutes and were run off as fast as the operator could grind. The theatre closed in 1923. The building had changed hands several times and was owned by Miss Martha Curry. When the Curry Building was torn down it had the Theatorium, Adeline’s Eat Shop, Kalt’s Restaurant, Leo Abraham'a Cigar Store, Salomon’s Jewelry Store and Charles Fox’s Haberdashery. A four story American Exchange Bank, who had obtained a 99-year from Miss Martha Curry, was to be completed on the site by May 1924.

More info, comments, corrections, photos, inside and out, old and new are always welcome!