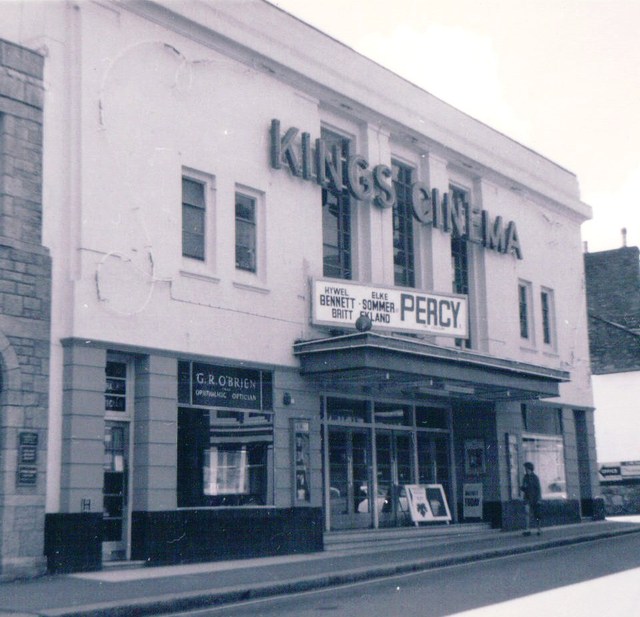 Located in Camborne Cornwall. The Kings Cinema was built for Gwyther Eastlake and Mr Mumford of Plymouth for their expanding circuit, Sound & Movement Cinemas. They commissioned the famous Bristol architect William Henry Watkins to design this and two others in Cornwall, the Regal Cinema, Redruth and the Plaza Cinema, Truro, although the actual architect was an Australian working for Watkins called Smith.

Opening around 9th April 1936, the Kings Cinema seated 982, slightly less than the 1,044 shown in the original plans (which had 780 seats in the stalls and 284 in the circle). There were shops on either side of the entrance and three tall windows dominated the frontage. The sound system was BTH. By 1942 the cinema had been taken over by Albert Jackson Withers, of Cardiff, to become part of his Cornwall Circuit. CinemaScope was installed in 1956. Closed in the early-1970’s, the Kings Cinema was converted to bingo under, successively, Top Rank, Top Ten and Apollo. It remains Apollo bingo in June 2013 (when, despite the camera data, my photographs were taken).

I moved to Camborne in 1973 when I was 5 and can never remember films being shown so must have closed around or before then. However I do have a vivid memory of them still advertising films for the Regal in Redruth for a while (quite possibly a few years) so I think film posters were still on display in the windows/foyer. The only poster I remember is The Golden Voyage of Sinbad which would have been about 1975. Can anyone confirm this or am I mad?!