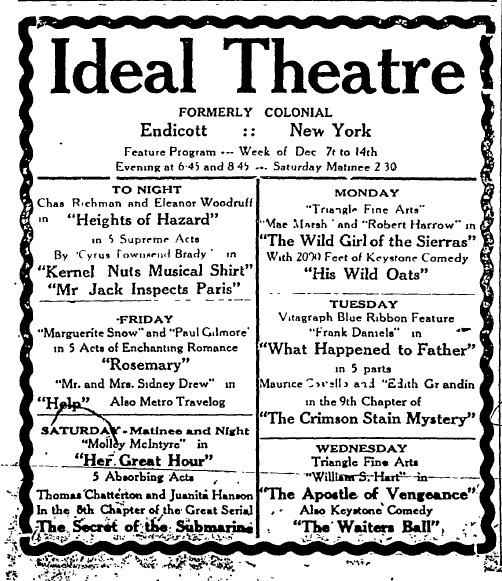 Endicott’s first movie house was not the Lyric Theater, but the more humble Colonial Theater, later renamed Ideal Theater, located a few doors down on Washington Avenue and opened by September 1914. The theater in the beginning sponsored a few local theatrical productions along with moving pictures.

John and Emma Laue (formerly of the Tioga in Owego) took over operations of the ‘jinxed’ theater (so described by the local paper) in October 1916 and it remained in operation until 1921 or 1922. Mrs. Laue, no doubt having seen the writing on the wall, had already been working as a cashier at the Lyric Theater for some time by that point. An October 1921 news article already referred to it as the “old Ideal Theater” and that there was a rummage sale being held in the building. It seems to have been leased out on occasion for a short while after its closing.

Whatever originally occasioned it, the ‘jinx’ was not shaken by the name change. Two serious accidents occurred during the theatre’s brief existence; a six year-old boy was killed when a car jumped the curb and pinned him to the wall of a building in 1920. The following year, a woman was seriously injured falling down the length of the basement stairs while preparing for the aforementioned rummage sale.

Oddly enough, nearby Montrose, Pennsylvania also had an early theatre named the Colonial (in existence around 1905) and a later, possibly the same, theatre, named the Ideal Theater (active in the 1920’s and 1930’s), almost exactly bookending this theater in time and name.

The building most likely still stands. The wide building at this address (which was taken from a 1920 business listing) closely fits the newspaper description of the “Stack Block” which a 1920’s article describes as being built “next to” the Ideal Theater, which means that either of the older buildings to the north or south, each of which have double entranceways and one of which appears to have been remodeled in the 1930’s or 1940’s, could have been the old Ideal Theater – and one of them probably was. The (north) building now at 110 Washington Avenue is for sale with the date of construction listed as 1920 – which, if true, rules it out. However, the same website claims the 116 (south) Washington building was built in 1975…which is clearly inaccurate. The streets in Endicott may also have been renumbered since 1920.

110 Washington Ave is currently the site of North Brewing Co. Having been in that building, I do not know how or where a theater may have fit. I would guess that 116 Washington was likely the site of the Ideal Theater.

The building to the right was the old ELKS BAKERY.

It was open the last time I visited NY in 1985. Brought back a lot of memories.

A careful examination of old postcards and photos (very few of which, unfortunately, give a clear view of this block) and of googlemaps' satellite view finally gives us the answer to which building was the Ideal.

The current large block at 112-114 Washington is actually two separate buildings that were merged into one retail location sometime prior to 1958. These have since been repartitioned but the prior remodel gives the impression of these addresses being part of the same building. Google’s satellite image reveals that the 112 Washington Avenue building is long and narrow with the adjacent building being wider and less deep – almost certainly the Stack Block. Which leaves the 112 Washington Avenue address, then as now, the location of the Ideal Theater. While it appears to be the original building, it has been so greatly altered that no likely trace remains.

Interior photos of the tattoo shop that now occupies this address indicate it has unusually high ceilings, further confirmation that this is the location of the Ideal.

Earliest mention of the theater found so far is in a September 1914 news article in the Endicott paper.