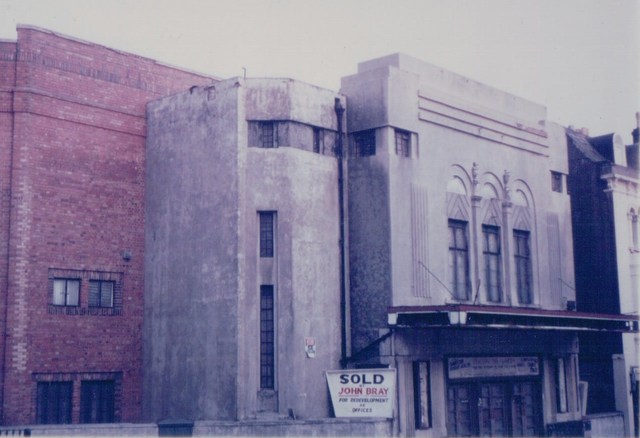 Located in St. Leonards-On-Sea, close to Hastings, East Sussex. The Regal Super Theatre was built for mixed cine/theatre use and was built by an independent operator. (It was originally intended to be named Rialto Theatre). It opened on 6th August 1932 with the film “Jack’s the Boy” starring Jack Hulbert. Seating was provided in stalls which was in the basement level and circle that was at street level. There were two boxes at circle level on each side of the proscenium. There was a large stage, and 16 dressing rooms. The Regal Super Theatre was equipped with a Compton 2Manual/6Ranks organ which was opened by organist Gerald Shaw. The theatre boasted a tea room for the convenience of its patrons.

Its stage came into use when the Hastings Players presented plays in the 1930’s. It was taken over by the Union Cinemas chain in 1935, and attracted big name stars such as Louis Armstrong, Duke Ellington, Jack Hylton and Jack Payne.

The Union Cinemas chain were taken over by Associated British Cinemas(ABC) in October 1937. The Regal Cinema was closed in 1940 due to wartime conditions, and it didn’t re-open until 3rd June 1946 when it was renamed Regal Cinema. Jessie Matthews appeared on stage in a production of “Private Lives” in the early-1950’s. and in 1955 the Carl Rosa Opera Company played the Regal Cinema for one week. The last show to be staged starred stripper Phyllis Dixie and the final film screened was “Destination Gobi” on 8th September 1956. The Regal Cinema was used just one more time, when at the end of September 1956, Syncopating Sandy broke the world piano playing record which earned him a place in the Guinness Book of Records for the next 26 years. The Regal Cinema was then stripped out and remained empty until 1973 when it was demolished. An office block named Gundolphus House was built on the site, which has since been re-named Ocean House.