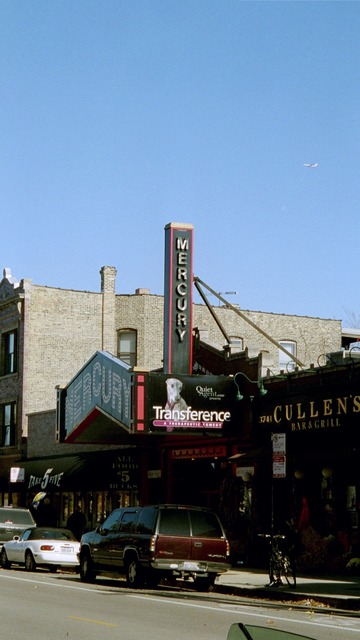 Opened as the Blaine Theatre, a nickelodeon, in 1912, the theatre later showed silent films until around 1920.

From 1920 until 1947, the former theatre served as a carpet cleaning factory.

Purchased by the DeKoven family that same year, the building served a series of retail uses until 1994, when it was purchased by Michael Cullen and Joe Carlucci and transformed back into a theatre, the Mercury Theatre, a 300-seat legitimate house, which opened in 1996 with “Pope Joan”.

The Mercury Theatre is located just a few doors down from the landmark Music Box Theatre on trendy Southport Avenue, in the neighborhood of the same name. It was closed on March 16, 2020 due to the Covid-19 Pandemic. It was announced that it would be closed permanently at the end of June 2020. On April 7, 2021 it was announced that the theatre would be reopened. A date is yet to be announced.

You’re right; it’s not. The Blaine school, named for politician James G. Blaine opened in 1893. The Blaine stayed in operation until the opening of the Music Box (which was originally to be called the New Blaine) in 1928

Thank you, Brian. That’s valuable information, as most accounts I’ve read have the Blaine closing around 1920 and don’t mention the name connection to the Music Box.
Also, in a 2005 article on the Mercury, the Chicago Tribune misspelled the name as ‘Blane’.

That happened two weeks before the Chicago Tribune announced the “New Blaine” Theatre would be built nearby, which of course turned out to be the Music Box. Who would have imagined that both theatres would still co-exist in the 21st Century, and under different names?

The Mercury has had some extended run live shows as of late. The Buddy Holly Story, Ron Hawking’s Sinatra Tribute, etc. (Urinetown I think was cancelled before it could open.)

That stretch of Southport has a quite active nightlife. There are taverns on either side of the Mercury. Take 5 and an Irish restaurant/tavern called Cullen’s. The latter is actually kind of partially incorporated in/next to the theatre.
To serve the theatre patrons as I remember. They may have a management deal or are/were part owners of the Mercury.

Much like the old Drury Lane on Pearson was to former neighboring nightclub Tamborine, musicians from the Mercury would often play at the neighboring bars on some off nights.
The Buddy Holly Story guys had their own offshoot band doing originals & some covers at Blue Bayou across the street. A buddy of mine ran karaoke at Blue Bayou, and they’d even show up for that after shows or gigs.

The Esthena Theatre was located at 3709 N. Southport. It was a liquor store for many years until it got torn down in 2000. It’s now a condo.

Hello Cinema Treasures! I represent the new ownership of the Mercury. The building, which includes the 290 seat Mercury Theater, Cullen’s Bar and Grill, and an as of yet unoccupied space (formerly Strega Nona/Take 5), was purchased by a group of investors in October of 2010, who named Walter Stearns, former artistic director of Porchlight Music Theater as Executive Director. The theater has sat dark for the past 18 months, after successful runs of The Screwtape Letters and Marks Gospel. The Mercury will soon return as a prime home for live theater in Chicago. Currently, minor renovations are underway and the theater should be re-opening in February 2011. Visit our website at www.mercurytheaterchicago.com for more information

The liquor store on the site was Crown Liquors. My father, “Whitey” who managed the Music Box Theater from 1929 until his death in 1975, was friends with Frankie who delivered for Crown using only a special bicycle with a large basket in front and a large triangular kickstand. I never saw Frankie drive a car, but I was told he was pretty well-off financially.

Closing permanently at the end of the month.

Perhaps not so permanently: money found for a fresh start for the Mercury. Block Club Chicago story here.