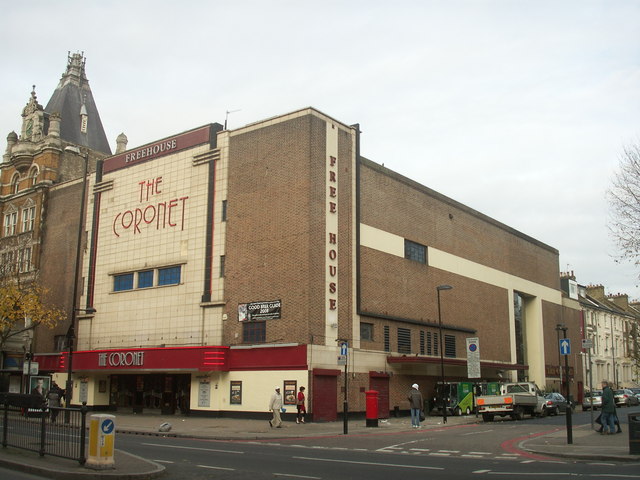 Located in the north London district of Holloway. Opened as the Savoy Cinema by Associated British Cinemas (ABC) on 5th February 1940. It was one of only a few cinemas that had been virtually completed as war broke out in September 1939 and was allowed to continue to open as planned. Designed by ABC staff architect William R. Glen in a modern Art Deco style.

It was re-named the ABC in 1962 and in 1979 they leased it to the independent Panton Films chain, who re-named it the Coronet Cinema.

The Coronet Cinema closed on 22nd June 1983 with Harrison Ford in “Blade Runner” and William Hurt in “Body Heat” playing in a double bill in the still unaltered cinema.

In 1984, the auditorium was converted into a snooker hall with a false ceiling across from the front of the balcony, the balcony became an un-used area attracting flocks of pigeons who had managed to gain entry. The foyer became an amusement arcade.

By 1987, the building had become vacant and lay unused. The J.D. Wetherspoon chain of pubs purchased the building and it was converted into a pub, re-opening as The Coronet on 14th March 1996, restoring all the features of the cinema.

The refurbishment and restoration of this former cinema won awards for the Wetherspoon chain of pubs, and it is a great place to go and have a pint of beer and a meal and take in the atmosphere of a suburban movie palace.

This seems about the best sort of conversion an old single-screen cinema can undergo: it retains all the space and decoration and is indeed a nice airy place to drink in! Bingo decor and accoutrements are not so aesthetically pleasing! Don’t forget the pleasures of the Egyptian “Capitol” in Forest Hill, alas, without the first “jellymould” Compton theatre Organ that was originally installed but the beer is fine.

Just caught your interior shots Woody – Very nice so I don’t need to upload my rather inferior interiors.

I did some googling and found some other photos.

1983 when it was the Coronet: http://www.nemostudios.co.uk/nemo/sections/br/coronet4.jpg

Wetherspoon News for Summer 2019 records that Neil Sean has made a 12 minute film about the history of the cinema and the stars who appeared there in person. To be found on You Tube under “Memories of the Coronet”

Video of the Coronet