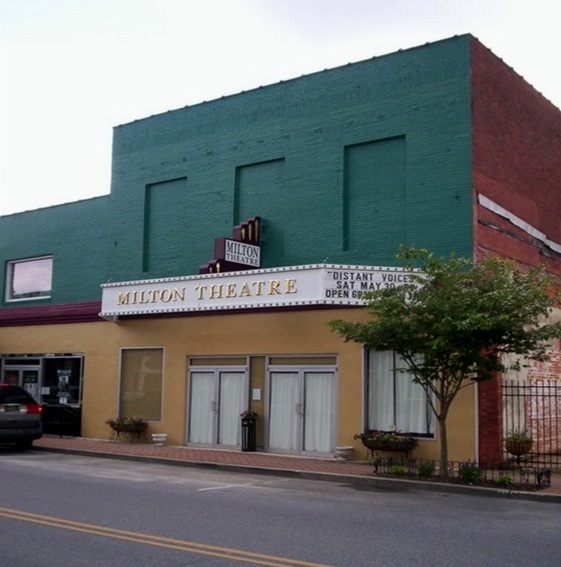 One could not overlook the Milton Theatre when writing about the history of the town of Milton in Delaware. From the early silent movie days to the modern wide-screen, color, talking movies, the Milton Theatre proved to be a great place of entertainment for local ciitizens and played an important role in the town’s developing character.

In 1939, with a seating capacity of 434, the theater was considered far superior to many larger theaters, accoustically and visually. The theater building (circa 1905)survived three major fires, but extensive water damage from the Great Storm of 1962 caused the Milton Theatre to close its doors for good, with Elvis Presley’s “Blue Hawaii” being the last feature film shown.

The Milton Development Corporation formed as a non-profit 501-©(3)in 2000, with a mission to renovate the old theater building to its former usage as a forum for the presentation of classic silent movies and a venue for the performing arts.

The Milton Development Corporation has raised $300,000 of the estimated $1.8M needed for the Milton Theatre Project. We are exploring every possible avenue to raise the necessary funds to preserve the Milton Theatre and restore it to a valued state.

In 1939, with a seating capacity of 434, the theater was considered far superior to many larger theaters, acoustically and visually. The theater building (circa 1909) survived three major fires, but extensive water damage from the Great Storm of ‘62 caused the Milton Theatre to close its doors for good, with Elvis Presley’s “Blue Hawaii” being the last feature film shown.

The theatre was recently purchased by The Milton Development Corporation, a non-profit corporation of community and business leaders. The MDC has exciting plans for the theatre which has been listed with the National Register of Historic Places.

Plans are underway to authentically renovate the former theater to serve as a showcase for art, literature, music, as well as an outlet for local theater groups, other live performances, and community activities.

Professional computer training coach and web developer Regina Wood (owner of PCClarity, Inc. who is in the process of developing a website for the MTP) after seeing Sprouseâ€\s haunting and narrative portraits modeled after vintage photographs felt that his work perfectly embodied the spirit of the theatre and suggested that he visit the building with the hopes of formulating an exhibition. After his initial visit to the theatre, Sprouse too was inspired by the magnificence of the historic space and immediately contacted his close friend and contemporary, professional artist Michael Bell to arrange a two-man exhibit to serve as a fund raiser for the theatre.

Michael Bell eagerly agreed to participate in the event and to formulate the project, Bell and Sprouse will be filling the theaterâ€\s seats once again, with the debut of a short documentary film created as a tribute to the Milton Theatre Project on the making of their collaborative painting, “Never Was.” This is the only featured collaborative painting, created by both Bell and Sprouse, to be raffled off to a lucky ticket holder during the course of the evening. This original work has an official appraisal value of $4,000. Narrative portraits of silent and early film era stars by Michael Sprouse, along with Michael Bell’s contemporary celebrity portraits will be available &gt; for purchase throughout the evening. Other Celebrity memorabilia, donated by today’s Hollywood stars, will also be raffled off during the event. This will include autographed scripts and photographs from the cast of CSI Miami courtesy of actress Sofia Milos; and autographed copies of “The Company She Keeps” by best selling author Georgia Durante.

Specializing in contemporary narrative portraiture, both Michael Bell and Michael Sprouse have a long list of impressive credentials to their names.

Michael Bell, known for his inspired contemporary portraiture, is also listed in the 2002-2003 printed edition of “Who’s Who Among America’s Teachers.” Bell was the 2001-2002 recipient of the Maryland Art Education Association Most Outstanding Career Arts Educator Award and was the 2000-2001 “Teacher of the Year” at Southern High in Annapolis, MD. Bell has painted portraits for some of the most famous and infamous people of our time, including the late John Gotti; ex-Mafia wife, Kodak Cover girl & Celebrity Author Georgia Durante; HBO’s Sopranos cast members Joe Gannascoli, John Fiore, Steven R. Schirripa, Tony Sirico, and Sofia Milos. Sofia Milos is also a star actress on television’s CSI Miami. Bell has also donated art generously for Hugh O'Brian’s Albert Schweitzer Leadership Awards in Beverly Hills, CA., and for domestic violence charities throughout the country while doing appearances with best-selling author Georgia Durante. Bell is currently involved with other related projects with Georgia Durante, Denise Brown, and actress/model ZoÃ«. Bell has a solo exhibition on display currently at the Zwaanandael Gallery in Lewes, DE through December 3rd.

Artist Michael Sprouse was the owner and curator of prominent art gallery eklektikos in Washington, DC from 1994 through 2002 which was known as one of Washingtonâ€˜s top ten galleries. In November of 2002, Sprouse opened the Zwaanendael Gallery of art on 2nd street in downtown Lewes, Delaware. Works by Sprouse can be found in public and private collections across the world and he has established himself as an important fixture of the Washington, DC and mid-Atlantic art scene. The June 2002 issue of DCONE Magazine described Sprouse as “one of the most important young artists in Washington” who knows “the joy of creating something new and original with canvas, paints and loads of talent.” Sprouse is also represented by the renown Lowe Galleries of Atlanta and Los Angeles as well as with Ariel Of France. Works from and positive reviews of Sprouseâ€\s exhibitions have been printed in such publications as Art and Antiques, the Washington Post, the Washingtonian and more. Sprouse is also scheduled for a solo exhibit of new works in the Corkran gallery of the Rehoboth Art League in May of 2004.

The Milton Development Corporation has raised $300,000 of the estimated $1.8M needed for the Milton Theatre Project. The event provides the perfect opportunity to come out and join artists Michael Bell and Michael Sprouse and support their art to raise the necessary funds to preserve the important Milton Theatre and restore it to a valued state.

This important event will take place on Saturday, November 29th at the Milton Theatre located at 424 Mulberry Street in downtown Milton, Delaware. The event begins at 6:00 PM. A short documentary film and artist talk will begin at 6:30 PM. Viewing of the exhibition begins at 7:00 Pm and the raffle will begin at 8:30. Tickets for the event cost $20.00 which include chances for all the raffle items as well as complimentary food and drink.

For information regarding ticket purchase contact Michael Sprouse at the Zwaanendael Gallery of Art at 302.645.1005 or Regina Wood of PCClarity, Inc. at 302.236.1816