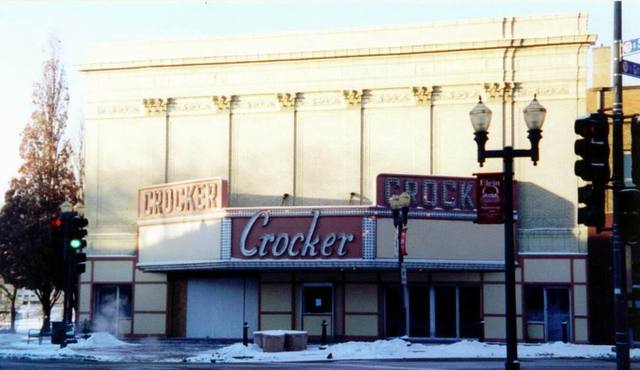 The Crocker Theater was built in 1923, and was the largest theater at the time in Elgin. It showed silent films, and had up to three vaudeville acts each day. A Wurlitzer organ once accompanied the films, as well as popular sing-alongs before and after features. Among the celebrities to grace the stage of the Crocker Theater in its early days were Admiral Richard Byrd, sharing his polar adventures, and Gene Autry, the cowboy star.

The theater began showing sound films in 1929, but by the mid-1970’s, the theater had become a venue for Spanish-language films. It closed its doors in 1981 and has remained shuttered since.

Several schemes for its future came and went, including reopening it as a movie theater, converting it into a nightclub, and giving it over to mixed retail and residential use.

Since the Crocker Theater was acquired by the city of Elgin in 2000, it had not been able to come up with a concrete decision on the future of the theater, which was entirely gutted inside by its previous owner. In June 2005, the city had the Crocker Theater razed to make way for a condominium development project.

The Crocker Theater was never overly ornate, but built in a simple, Neo-Classical style, with a terra cotta facade, partially hidden behind a 1950’s vintage marquee.

I don’t know where these number are coming from, but according to the book I have right beside me and the Elgin history web site, the correct seating capacity for the Crocker should be 1,600.

Proof can be found under “.4 Silver Screen and Crystal Sets” under chapter VII at this web site:

again, the font on the front of the marquee greatly resembled that of the riviera here in uptown chicago. i always recognize this because of the modern “sharply cut” lettering. must have been a b&k thing. i would bet the riv and the crocker’s marquees were replaced during the same era.

just found this, on a related note:
View link

The marquee unfortunately wasn’t saved. I thought it looked great and it worked really well with the original building. The rest of the facade has, however, supposedly been put into storage by the city of Elgin.

The site of the Crocker Theater remains empty, and the state of the housing market implies it may stay empty for a long time.

If you’re interested in following developments pertaining to the Crocker site and how it’s redeveloped or Elgin news in general, you can grab a feed of my Elgin blog.

Photo two shows what looks like one-sheets in the poster frames,But nothing on the marquee.Did they just shut down and left the one sheets in or were they too lazy to put a title up.Strange!

Acording to the header Mike this theatre closed in 1981,and the photos are from 1982 looks like they just left the one-sheets up instead of taking them home.

The Crocker was a Plitt Theatre in the mid-70’s when I joined the company. I remember two things about the time I helped out covering shifts there: (1) the classic front was way more impressive than any of the interior, expecially the ugly auditorium, and (2) the guy my DM hired to run the place would take a short break to “go down the street” and come back reeking of alcohol.

Five months after unveiling his plan to transform Elgin’s Crocker Theater into a thriving downtown mecca, a Chicago-area developer is having second thoughts. Jeff Maher said he’s frustrated by the lack of progress in turning the abandoned landmark into a discount movie house. A tentative agreement to purchase the Crocker expires today, and the developer said he’s unsure if he’ll continue pursuing the building. “I don’t know if I’ll accept or not,” said Maher of an opportunity to extend the agreement. “I don’t know if anyone wants to play ball.“ Specifically, Maher is looking for a response to a preliminary plan he submitted to the Elgin Chamber of Commerce months ago. In that proposal, the developer said it would cost between $2 million and $2.4 million to rehabilitate the gutted auditorium. But to be successful, Maher said, he needed the city’s help. Exactly how much Elgin would have to pitch in was not specified. That detail was left out on purpose, said the developer, who made a success of a similar project in Kenosha, Wis. “Nothing was engraved in stone for price,” he said. “I wanted to see what they’re willing to do and go from there.” But the omission has caused the project to stall, said Jim McConoughey, vice president for economic development at the chamber. After a series of meetings with Maher, McConoughey reviewed the preliminary report and asked for more specifics. Serving as a conduit between developers and the government, McConoughey said he wants to make sure any plan submitted is complete and practical. “A project scope has to come from the developer with details of what his project would be and what the city’s role would be,” McConoughey said. Underlying the discussion is Maher’s tentative pledge to buy the Crocker from current owner Dominic Buttita for $800,000. Some officials at city hall believe the price is too high, given Buttita paid about half that amount for the building two years ago. They’re wary of taxpayer money being used for the owner to make a profit. But Buttita said improvements to the building — including a new roof — bring his investment to more than $1 million. “I think they think I’m making money on this deal and I’m not — I’m going to be losing money,” he said. If Maher can work out financing, a discount movie theater is in line with the city’s plan for downtown, McConoughey said. The question now — as it was months ago — is whether the city and developer can reach a consensus. “I think it would be something people would go to,” McConoughey said. “It would bring folks downtown that historically have not gone downtown.”

Portions of the salvaged Crocker facade have been rediscovered recently: https://www.chicagotribune.com/suburbs/elgin-courier-news/ct-ecn-crocker-theater-work-day-elgin-st-1101-20191102-5skcakzo5rg6rnh2em2qcfqzba-story.html