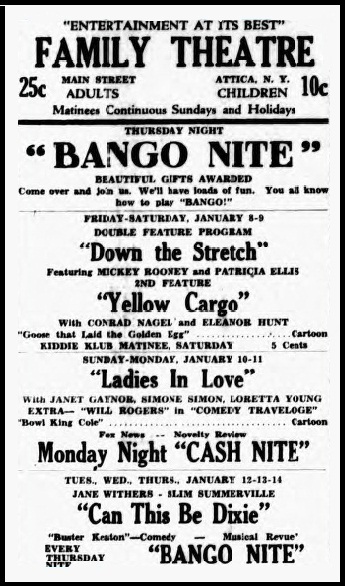 The Bijou Theatre was already operating by 1908. By 1920 the name had been changed to Family Theatre. Listed in the 1940 Film Daily Yearbook with 250 seats.

Attica’s Family Theatre was advertised in the December 13, 1921, issue of the Batavia Daily News. The operator was James Martina. Donovan A. Shilling’s book Rochester’s Movie Mania says that what was to become the Martina Circuit began with a theater in Attica in the 1920s, so it must have been this one.

The February 19, 1920, issue of The Attica News ran a brief item about “…F.W. Hark, former proprietor of the Bijou, now the Family Theatre….”

The January 15, 1914, issue of the Silver Springs Signal said: “Frank W. Hark of Fillmore has bought the Bijou Theatre in Attica.”

The Bijou Theatre was advertised in the August 31, 1911, issue of The Attica News. There are probably earlier mentions of the Bijou, but I haven’t been able to track them down yet.