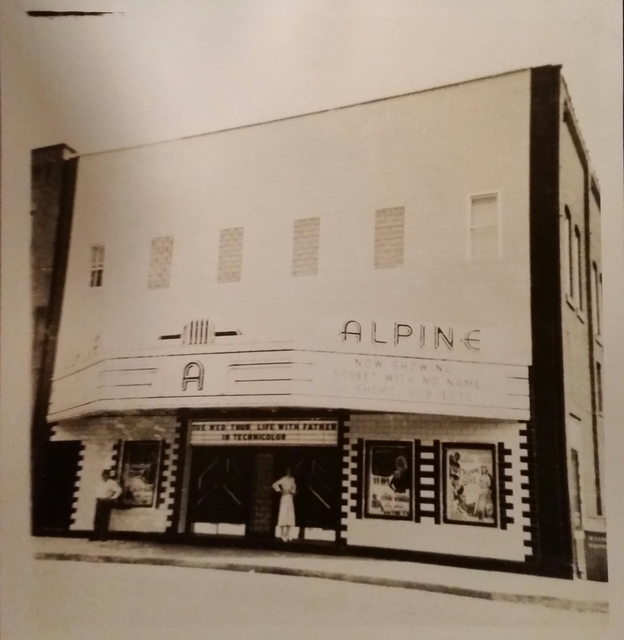 Any additional information on the Alpine Theatre would be appreciated.

This web page says that the Alpine Theatre was in a building at 6th and Charles Streets. There is a tiny photo in which the name on the marquee is recognizable, but not much else. It’s the only photo of the Alpine I’ve been able to find.

“Wellsburg, W. Va. — The Palace has been acquired by Urling and Anderson, circuit operators, with several houses in the upper Ohio Valley.”

A May 27 item noted that the Palace had previously been operated by the Manos Amusement Company, and that it had just been renamed the Alpine Theatre by its new owners.

The Film Daily of July 28, 1932, had said that the New Palace Theatre in Wellsburg had just been reopened by N. G. Anas after having been closed for two months for renovations costing $20,000. Nick Anas was operating a theater in Wellsburg at least as early as 1928, and it was probably this one.

A new theater called the Strand was opened in Wellsburg by W. G. Adams in 1920, as reported in the July 24 issue of FD. In 1916, Wellsburg had a movie house called the Majestic Theatre, which I found mentioned once in Motography. I’ve been unable to discover if either the Majestic or the Strand eventually became the Palace, or if the Palace was an entirely different theater.

The address for the Alpine would’ve been very close to 604 Charles St, Wellsburg, WV 26070 I was a projectionist, for about a year, at the Alpine Back in 1962/63, I came across a man who’d been a close childhood friend of my dad’s. A black man named Raymond Taylor. Ray went by the name “Sugar” to most around town. I always called him Mr. Taylor. Raymond Taylor, a longtime ham radio operator, was the caretaker and projectionist. Mr. Taylor took me under wing and taught me how to run the projectors so that he’d have time to do other work. This was the first job I’d had with a significant amount of responsibility. You really needed to pay attention!

During the war years, circa 1942, when I was 12 years old, I used to hang out at the Alpine Theatre. My Cousin, who carried film between the Alpine and the Star Theatres, on “bank night”, (because there was only one print available between 2 theatres) got drafted. He asked me if I wanted his job, which gave me access to the projection booth, and eventually I learned from the projectionist (Wanda) how to run the projectors. Her husband had already been drafted. I shared this position with a Naval Reservist from Bethany, who was attending college there. He was eventually called to duty, which allowed me to take the job as projectionist. At 12 years old, I worked as a projectionist at the Alpine for a few weeks before management realized that I was under age per the labor laws, and as a result, they had me teach the Janitor to run the projectors. Once I taught the new projectionist their job, I was re-assigned to be the ticket-taker for movies.Eventually the projectionist at the Star Theatre (Dick) was drafted, allowing me to return to the projection booth, which I enjoyed, until around Christmas time, 1951 at the Star Theatre. Once Dick returned from the service, he was allowed to assume his job as the projectionist. This resulted in me evaluating my options, and I went into the U.S. Air Force on January 7, 1952. I spent my military career as a photographer, stationed at various bases overseas and in USA. After military retirement, I returned to the projection booths for over 30 years in various locations. Richard C. Biggs ()