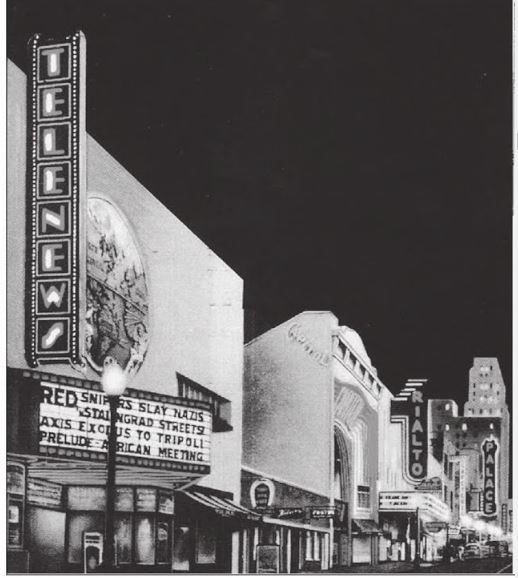 The 11th Telenews Theatre in the United States was created when an existing retail space at 1515 Elm Street was converted to a 640-seat theatre that played newsreels exclusively for its first five years of operation. The remodelling job cost $80,000. The Telenews Theaters circuit combined with the Interstate Theatre Corporation opening it on November 21, 1941. The all-newsreel concept was altered to include features as of December 1946.

Newsreels were minimized to the point that Interstate Theatres Inc changed the theatre’s name to Dallas Theatre opening December 25, 1950. One years later, Interstate Theatre Corporation sold the theatre to Greater Texas Theatres on November 1, 1951. They ran the Dallas Theatre just six months, closing it on May 12, 1952, and selling it to a real estate entity. That company placed an advertisement in July 1-2, 1952, offering everything including the seats and projectors for sale, thus ending the Telenews/Dallas Theatre.

Architect Jack Corgan’s plans for the Telenews Theatre in Dallas were featured in this article from Boxoffice of July 18, 1942.

Three unrelated Elm Street theater row houses have been called the Dallas Theater and the total combined time of their operation is less than five years. The first was at 1301 Elm operating in 1913 exclusively as a photoplay house. The second was at 1209 Elm when Wayne Babb bought what would become the Strand Theater and former Hippodrome/Joy/Wade in 1946 creating the short-lived Dallas Theatre. But this entry is about the Telenews Theater which was created just two weeks prior to Pearl Harbor, opening on November 21, 1941.

1515 Elm was a retail space housing a paint store followed by three grocery stores (Piggly Wiggly, briefly Lotus Foods, and Helpy-Selfy) and finally home to several businesses including Van Winkle’s Book Store and a tavern. In August of 1941, the Mirror at 1517 burned down. Just two weeks later, the 11th Telenews Theatre in the United States was announced next door to the charred Mirror which was still standing.

The Telenews was created using an existing retail space at 1515 Elm Street and turned into a Jack Corgan designed 640-seat theatre that played newsreels exclusively for its first five years of its operation. Corgan’s remodeling design would cost $80,000 and carried out by George P. O'Rourke Construction. Interstate — having just lost the Mirror next door to fire — decided to team up with the Telenews Theaters circuit in a joint operation. They opened it on November 21, 1941 to coincide with an annual Santa parade that would be rained out that year.

The timing was fortuitous and the theater generated great foot traffic selling out its first day and drawing crowds throughout World War 2. The twinkling globe was a beacon that marketed the theater well. Patrons could watch films for any of five newsreel companies edited on a speedy machine known as “Oscar.” They could also go upstairs and participate in live quiz shows or listen to radio news that was created on premises by WFAA and KGKO. Throughout the war, this format proved successful but after the War, the audiences interest waned so the programming was changed.

After five years of exclusive newsreels and documentaries, the Telenews had a policy change that allowed it to play “important” films. Said to be an art cinema house when announced in December of 1946, the Telenews didn’t really reach that goal looking very much like a traditional movie house. And not abandoning newsreels, the Telenews publicized that they would buy local footage from those capturing newsreel footage on their 8mm or 16mm cameras. But the days of the newsreel as a standalone interest were gone. The theater was closed for remodeling as a cycloramic screen was put in and the radio and reading rooms removed. On Christmas Day, 1949, Interstate took over soul possession of the theater and rebranded it as The Dallas Theater opening with “The Fallen Idol.”

The name change didn’t help the fading property. Less than two years into the rebranding of the theater, Interstate sold the lackluster property to Greater Texas Theater’s L.N. Crim, Jr. and Robert Hartgrave which had the American premiere of “Bonnie Prince Charlie” when it opened Nov. 1, 1951. Greater Texas tried art and then they tried racier fare to no avail and the Dallas Theater didn’t make it to a full year for Greater Texas ending the theater’s 11-year run. Dallas' theater row would see similar audience erosion throughout the decade. The Dallas Theatre closed May 12, 1952 and was sold to a real estate entity. That company placed an advertisement in July 1-2, 1952, offering everything including the seats and projectors for sale, thus ending the Telenews/Dallas Theatre.