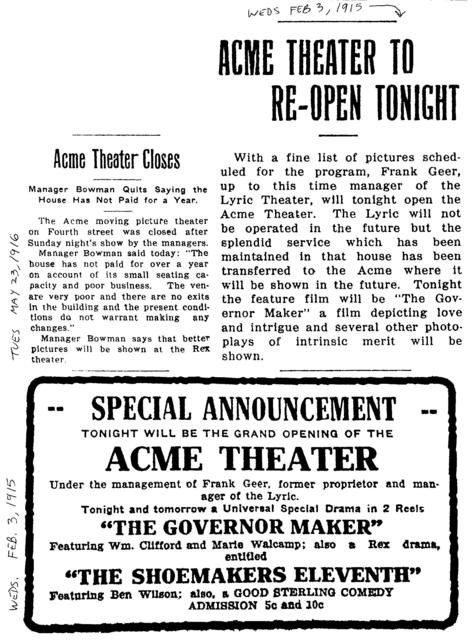 Opened on March 18, 1908. Had a stage for vaudeville acts and showed movies. In late 1914 the theater closed because of slow business. On February 3, 1915 the theater reopened. Sadly, business went slow again and the theater closed permanently on May 23, 1916. It sat vacant for a few years then in 1920 got converted into a six lane bowling alley called Adam’s Lanes. The building was much wider than shown in the only picture I have. It was two stories high and the upper floor was offices and apartments. The bowling alley continued to operate into the mid 1970’s then around 1976 the building was torn down and has been a parking lot ever since. King Solomon’s Reef restaurant is right next door to where the theater/bowling alley used to be.

The 1915 reopening ad boasts of the Acme Theater’s comfortable opera chairs. Seating in J. St. Peter’s Acme Theater of 1908 was far different, judging from the photo of the auditorium at the bottom of page 180 of the November, 1908, issue of The Coast. The narrow aisles are lined with what appear to be wooden folding chairs.