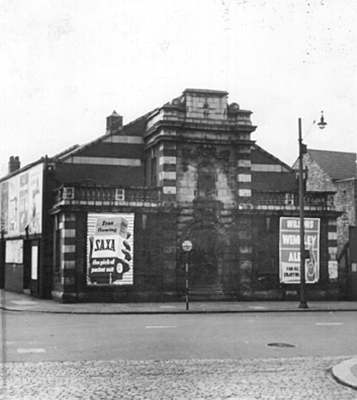 Located in Eccles, part of Greater Manchester, on the corner of Church Street and Corporation Road. The Eccles Picture Theatre was opened on 28th June 1912. Designed in a Georgian style by architect John Knight. The proscenium was 22 feet wide. On 13th March 1916 it was re-named Empire Cinema. It became known as the ‘flea pit’ and was the last cinema in Eccles to be equipped for sound, when in February 1932 a British Thompson Houston sound system was installed and the film “Common Clay” starring Constance Bennett.

The Empire Cinema was badly damaged by German incendiary bombs at Christmas 1940. It never re-opened. In 1949 there was talk of re-opening the building a civic theatre, but these plans came to nothing, as the owners Lancashire Entertainments Ltd. were still awaiting compensation for war damage from the Government. The building eventually had some repairs carried out and it became a car showroom. After that closed it lay empty for several years, then by 1986 it had became a carpet warehouse. This has since closed and the building has been demolished. A doctor’s surgery has been built on the site.