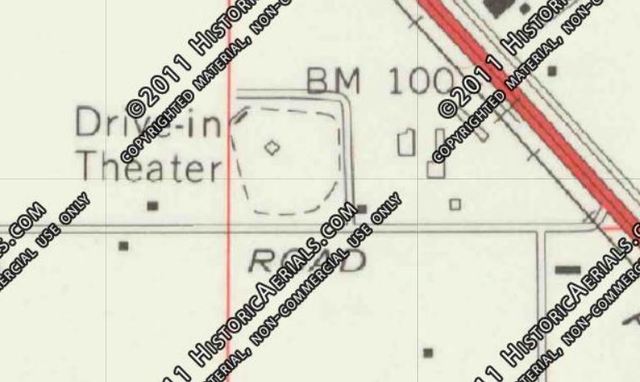 The Lucky Drive-In was opened around 1951, when it was operated by Clayton Gran, and he was still the operator in 1956. By 1957 it became part of the Robert L. Lippert Theatres Inc. chain. It was closed in 1982.

Today a number of commercial buildings and classic car buildings are in the area.

unique name! ithink i reember it being the happy go-luck drive-in? can anyone verify this.

I couldn’t find many mentions of the Lucky. The Sept. 22, 1951 issue of Boxoffice noted that Clayton Gran had obtained a building permit for the drive-in, which was “expected to be completed within six months.”

Boxoffice, June 28, 1952: “Co-owners Clayton Gran and Fremon Klint have opened their new $55,000 drive-in on Fulkerth road north of the Stanislaus district fair grounds. The theatre was named the Lucky Drive-In and it has a self-service snack bar.”

The Lucky was still operating in July 1967, when “The Weird World of LSD,” a black-and-white film directed by Robert Ground, had a record-breaking run there.

The 1978 Motion Picture Almanac, which tended to be reasonably accurate, still included the Lucky, run by R. Laykin. In the 1980 edition, the owner changed to Maestri, which is how it stayed through its final MPA appearance in 1982.