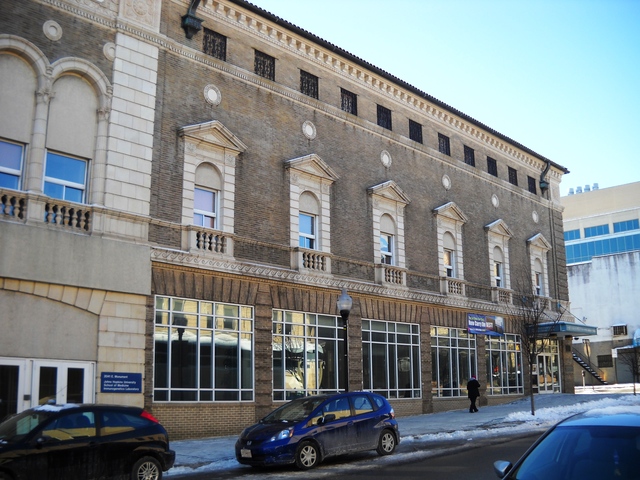 The State Theatre opened on April 16, 1927, just a few blocks down the street from the Red Wing Theatre. It was built for the Durkee organization, and was the largest of Baltimore’s neighbourhood movie theatres. It was equipped with a Wurlitzer 2 Manual 7 Ranks theatre organ which was opened by organist John Decker. The State Theatre presented movies and vaudeville. There was a 20-lane bowling alley in the basement, which opened several months before the theatre.

The State Theatre was closed on December 1, 1963 with “Phantom Planet” and “Terror From the Year 5000”. It became a gospel church for several years. Today the interior has been converted into office space by John Hopkins Hospital. Although the marquee has long been gone, much of the original façade remains intact as of January 4, 2014.

After forty years in a private dwelling, the State Theatre’s Wurlitzer organ was installed in the ballroom of Baltimore’s Garrett-Jacobs mansion in 2012. Donated by former owner Ray Wagner with the stipulation that the instrument be available for public performances, the organ is now used for concerts and to accompany silent films about once a month (see the “Events” link on the organ page.)

Now owned by the Engineering Society of Baltimore, The Garrett-Jacobs mansion is also the home of an artists-in-residence program for four musical groups. The ballroom, 30x70 feet, was adapted from existing space in the early 20th century, and was designed by noted architect John Russell Pope. The room has been mostly restored, with only the ceiling coffers and surrounds remaining to be dome. The restoration and refurbishment was handled by Henry Johnson of Johnson/Berman Architecture and Interior Design.

In 1947 we were living in Washington and one weekend in March we took the electric train to Baltimore to visit friends of my parents who were on the vaudeville bill at the State.

On the bill were Paul & Connie McWilliams (magician- our friends), Arthur La Fleur (muscle act), Marie Lawlor (singer) and Jack and June Blair (dancers). The movie was a western and I got to see it several times as we wanted to stay all day and visit with Paul and Connie.

There is a lot of information about this organ on the net which is incorrect. Mr. Wagner (as he told me) sold the organ to the ESB. I don’t know why the Sun Paper printed the story the way they did. There are other information sources on the net which also have parts of the story incorrect. I recommend that if you are interested in the organ you contact the ESB directly or attend a program Buddy Boyd – Free State Theatre Organ Soc.

Grand opening ad in the photo section. The State and the Avalon opened on the same day.