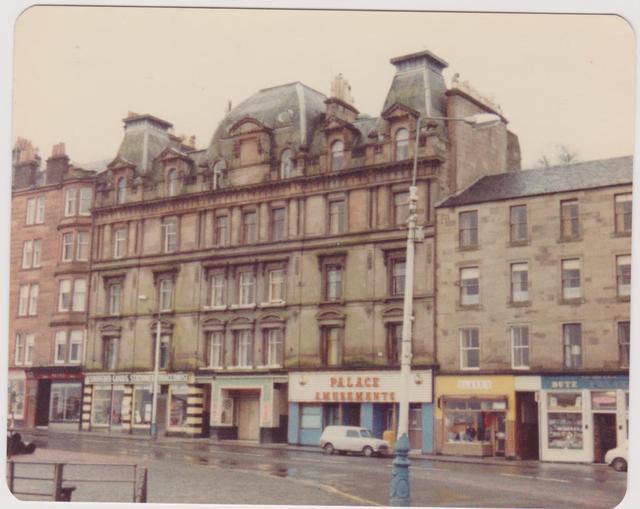 Located in Rothesay, Isle of Bute. The Public Hall was opened in 1879. Its entrance was through a passageway between shops and under a tenement block. In 1909 it was rebuilt as a music hall. Altered in 1913 to conform with the Cinematograph Act, it re-opened as the Palace Cinema in early-June 1913, and now had a 30 feet wide proscenium and a stage.

In 1929 a British Acoustic(BA) sound system was fitted and the Palace Cinema now boasted the Plaza Dance Hall and Palace Café attached. By the mid-1930’s it was operated by A.B. King and eventually was taken over by Caledonian Associated Cinemas,

The Palace Cinema was closed in early-1963 and was converted into a bingo club. In 1973, the Palace Cinema was re-opened as a live theatre, presenting a summer season of shows, but during the winter of 1973/1974, following heavy rain, the cliffs at the rear of the building slipped, and seriously damaged the auditorium making it partially collapse. The auditorium was demolished, and today only the front tenement building survives.

The Palace closed as a cinema on 2nd Feb 1964, becoming a bingo hall 4 days later. However due to increasing overheads, films returned part week on Tuesdays, Thursday and Fridays from 28th Nov 1972 until the Regal resumed the following Easter. The strip lights for bingo players were abruptly switched off on film nights!