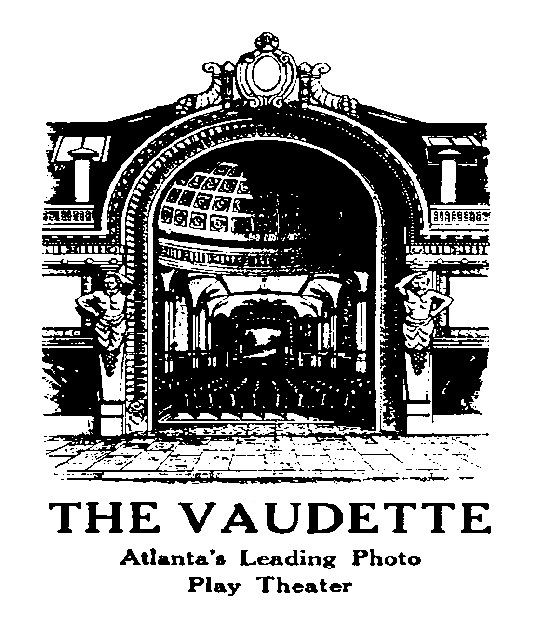 Google Maps will be unable to find the correct location from the old address. A long stretch of what is now Peachtree Street SW used to be Whitehall Street (from Spring Street SW north to the railroad tracks about midway between Marietta Street and Martin Luther King Jr. Drive.)

In addition to the renaming, the numbers have been changed. Comparing the 1911 Sanborn Map (in Volume 4, on sheet 465,) what was then 82 Whitehall St. SW did not become 82 Peachtree St. SW, but is in the next block south, between MLK JR. Drive (formerly Hunter Street) and Mitchell Street.

That block now has addresses from 100 to 134, but the entire even side of the block has been rebuilt with a massive single project, so the modern address would be a guess. The Sanborn map shows 82 about the middle of that block, which then had numbers from 66 to 102 Whitehall. If the lot the Vaudette was on still had its own number it would probably be approximately 116 Peachtree St. SW.

The 1911 map also shows movie theaters in buildings at 98 and 100 Whitehall SW. Whatever theaters they were would have modern addresses of approximately 128 and 130 Peachtree SW.

Sanborn Maps for Georgia can be found at this page of the Digital Library of Georgia, but the format they are presented in does not make them very easy to use. I’m grateful to DLG for making them available, but I wish they’d used a format more like the one the University of North Carolina uses for their collection.

The Vaudette Theater was located at 74-76 Whitehall St. in Atlanta. It was built by J.G. and A.C. Evins. The front of the theater was an adaptation of the famous “Petit Palais” in Paris, France. The height of the entrance arch was 30 feet and the width 20 feet, flanked by two allegorical figures supporting the half dome above.

I remember an old book I used to have that showed a picture of Whitehall St. Below Hunter St. In the picture was the J. M. High department store and the Central Theater. It goes on to say that the Central was the sight of the old Vaudette.