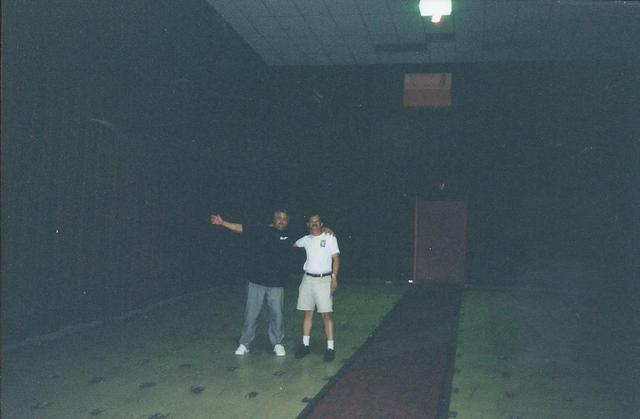 Opened on August 2, 1985, the University Place Six Cinemas was located across HWY 29/N. Tryon from UNCC and was operated by Carmike Cinemas. At first a thriving theater that premiered many top art films and high grossing blockbusters. In fact, when “Top Gun” opened, the studio split the costs of attaching half of a real jet and crumbling bricks to the outside of the building to give the effect of a jet flying through the theatre.

Unfortunately, the combination of poor management, rough-housing employees and over all lack of care for the theater would close it down on June 25, 2000. It sat empty for about a year before the property owner literally cut the lobby and theaters in half to form small shops and more parking.

The only evidence of this theater can be found in the booth operator’s door that leads too…?

Judging from Google Earth — it looks like the building that WAS at this address was torn down and something new put in its place. Does the shell of the building still stand?

I have the original ads from the grand opening that was advertise in the Charlotte Observer on August 2,1985. The grand opening attractions for the opening of the University Place 6 were

4-“The Goonies”-Charlotte’s only presentation in 70MM

“Back To The Future”

I have found the original ads for the opening of the University Place 6. If you need to see them,please e-mail me at

Speaking of Steven Spielburg’s THE GOONIES it was the only theatre in the state and the only Charlotte cinema that presented it in 70MM-6 Track Dobly Stereo. Ad for August 2,1985

Opened on August 2, 1985 under Consolidated Theatres.

I don’t recall why, but after working at Town Cinema 6 for a while, I ended up working at University Place briefly, too. It was still run by Consolidated when I was there. The manager was Art Justice – super nice guy to work for. I worked there in 1988, but never advanced much further than concession worker (at Town Cinema, I was a projectionist/relief manager).

On Halloween night, 1988, the power was out in almost all of University Place. I think the grocery store was the only business with some sort of power running. We all stayed there anyway (on the clock, no less) and just hung out. The drink machines were electric, but the fruit punch machines still dispensed. So here we were, a bunch of idiots in the dark drinking fruit punch and someone had the bright idea to bring a ouija board (it was Halloween, after all). I know this story’s going to sound like something from a slumber party or a sub-par/super-cliched Goosebumps story, but I assure you it’s all true…

We took turns playing with the ouija board and contacted the spirit Ted (he spelled out his name – haha). This was after a lot of “Are you moving it? You’re moving it aren’t you?” We all sat around the board and someone asked “If you’re really here, give us a sign.” Just then, the two people on the board slid the pointer off the side of the board and the theater lights flickered on and back off. Coincidence? Sure, but it spooked us all pretty well.

On one fateful night, I was working Saturday evening and didn’t feel well. I remember a friend of mine came in to see Iron Eagle 2 (so he was the one) and the new, big movie of the week was U2 Rattle and Hum. I wasn’t feeling well. As the evening went on, I just got worse and worse, and my shift didn’t end until 1:00 am. Turns out my appendix burst. I was in the hospital the next day and was there for over a week. After I got home, I called the theater and sadly resigned. It was a tough call, but I was also in my senior year of high school and getting ready to go off to college.

That said, it’s yet another theater casualty of my youth. I need to check out that building sometime and see if there are any remnants left.