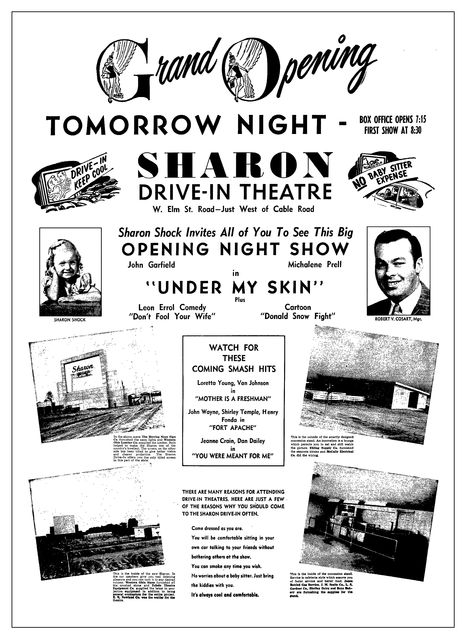 The Sharon Drive-In opened on June 30, 1950, featuring the 1950 drama “Under My Skin” with John Garfield and Michalene Prell. They also featured the 1948 comedy short “Don’t Fool Your Wife” with Leon Errol and Dorothy Granger. Co-Operative Theatres of Ohio was the booking and buying agency. Theatre Equipment Co. of Toledo (Albert Boudouris) was in charge of the construction. Screen size is 33 ft. x 44 ft. It parked 650 cars on a completely black topped parking ramp. It also used indirect lighting at each one of the in-a-car speakers. It was the last drive-in theatre opened by Horace and Eunice Shock. The drive-in was named after one of their daughters, “Sharon” Shock. Shock also had interests in other drive-in theatres in Marion and Van Wert, Ohio, and Fort Wayne, Indiana.

The Sharon Drive-In was open less than a month when on July 19, 1950, the Sharon’s screen tower was destroyed by a tornado. It caused $35,000 worth of damage to the drive-in. The screen tower and drive-in was rebuilt. In the spring of 1953, the screen tower was widened to 70 ft. for the screening of Cinema-Scope movies. In November of 1954, Shock signed a ten year lease for the operation of the Lima Drive-In, Sharon Drive-In and Gloria Drive-In to Sam and Nate Schultz’s of Selected Theatres Inc. from Cleveland, Ohio. Shock wanted to devote more time to his real estate business, developing shopping centers and residential housing. In May of 1956, Horace did file a request for rezoning of 11 ½ acres on the north side of Elm Street for the construction of an outdoor theatre. He pulled the request a few hours before a public hearing was to be held. He wanted to move the Sharon Drive-In so he could make more room for more development of the Westwood shopping center. It is possible that since he leased the theatre out he would not be able to accomplish this. He did say that it will be moved some day, but it was never was.

Horace Shock passed away on May 2, 1975, and Eunice Shock continued operating Shock Enterprises. In 1978, Selected Theatres came under fire after it began showing R-rated movies at the Gloria Drive-In and the Sharon Drive-In. Selected Theatres operated the Sharon Drive-In until 1982. In 1983, the drive-in was leased to James Shrider, who is Eunice Shock’s son-in law. Sharon Shock Shrider is her daughter. In 1990, Eunice decided to close the last drive-in theatre in Lima, Ohio. It was the last one to be built and the last one to close. The drive-in was demolished in 1991 and the property was redeveloped into a car wash and oil change business with storage units in the back.