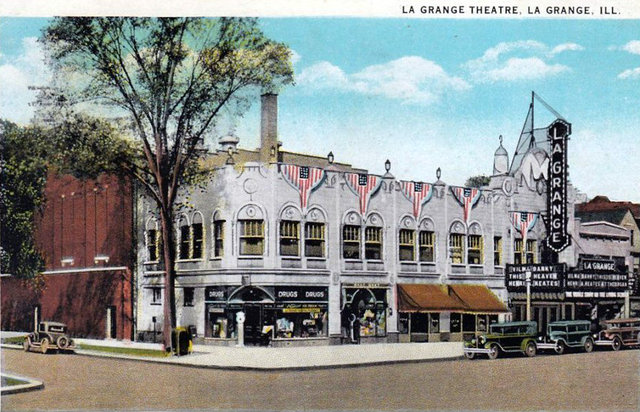 This 1,450-seat movie house in downtown LaGrange opened in 1925, and was designed by architect Edward P. Rupert working out of the architectural firm R. Levine & Co.

Operated by Chicago’s Balaban & Katz chain during the 1930’s thru 1950’s. It was re-modeled in 1949 to the plans of architect Roy A. Blass. The LaGrange Theatre remains in business today, divided into four screens in the 1990’s, and screening second-run fare.

In November 2008, the theater’s owners received $1 million from the village of La Grange towards the renovation and restoration of the theater, which is expected to take a year to a year and a half to complete.

This theatre was the source of some of my stranger experiences back in the 70’s when I was working as a relief manager, including this one: On a beautiful weekend afternoon, the lobby doors were open to take advantage of the outside air. As the concessionaire was filling the buttermat with Kraft topping, a bird flew through the open doors and into the buttermat and drowned.

That concession stand was cursed. On a Sunday afternoon in ‘76 the Chicago area was hit with a heavy downpour. A roof drain above the stand plugged up with leaves and stuff. It literally rained inside until I was able to get to the offending roof drain to open it. I got soaked to save that stand.The things we did in the name of our theatres.

Another time a pipe in the dressing rooms under the stage split during an extreme cold snap. It was a Saturday. Ed Konradt was the DM. Rather than pay a plumber the Saturday rates, he went home picked up his wrenches and between the two of us we repaired the offending pipe before losing the first show. We were a little late going on screen but got all shows in that day even with having to turn off the water for awhile.Fortunately it was an easy repair.

Oh, La Grange was such an old place. I’m glad it is still around.Does anyone remember cleaning plenum chambers in the old theatres?

The remodeling of the LaGrange Theatre by Roy B. Blass in 1948 occasioned a three page article by decorator Hanns R. Teichert in the January 8, 1949, issue of Boxoffice. There are several photos.

The La Grange was NOT designed by Rapp & Rapp. It was designed by E.P. Rupert for R. Levine & Co. Article in photos section.

I remember when they first split the theater - they just split it straight in half and for a time the seats were still pointed at an angle as if the wall down the middle wasn’t there. My wife and I had our first date here - “The Sure Thing” - she was and still is 36 years later.

I saw Spaceballs here in 1987 when I was visiting my friend who lived nearby. We were 13 and thought it was the most hilarious thing ever. Great times. The website looks like restored it back to single screen at some point and put in new seats and did some nice renovations.

I worked there as well as an usher from 1977 through 1981 with a break in between, so I know some of the other folks here who have posted. I have a lot of those same late ‘70s memories as they do, as well as sitting in the off-limits balcony with Ms. Velus during breaks, the 6-12 shift, double shifts on Saturday, the dollar eighty-five-and-a-half cents an hour sub-minimum wage, climbing to the roof after work at night with Olympia beer and looking at the Chicago skyline, getting Chinese food for the projectionist Joe Montana (went to a few Sox games with that guy, cool dude).

Also, hearing war stories from crusty old Jack the ticket taker about the public buses on Cermak, closing up at midnight with all of 3 patrons in the 1400+ seat floor, $1.25 popcorn buckets, tall boys coolin' in the ice maker, ice cream sandwiches, memorizing all the lines to “Rocky”, “Heaven Can Wait”, “The Sentinel” and all the other long runners, watching Botes change the marquee letters with his ladder on Thursday nights, the guys (Flynn, Barry, Horner, Liming, Robinson, Havey 1, Havey 2, Havey 3, King, the dude that liked Rush, Frank with the fast cars that also worked at a service station), the ladies (Jones, McAvinchey, Mendolia, Wall, Hayden, Pliml, Hudrlick, Reetz, Powers, Lewis, Velus 1, Velus 2, Comstock), the Jones-King wedding at the Congregational Church across the street (usher marries candy girl, alert the media).

Let’s not forget Mrs. Brewer - she sold tickets and performed Assistant Manager duties for God knows how many years, even since I was very young. She used to ‘card’ me when I was 11 since I was tall, and she thought I should pay the adult price of $1.25 instead of 75 cents. She lived behind the theater in one of those apartment buildings on Madison, so many nights after midnight, I would walk her to her door after the theater closed, so she’d get home safe. I didn’t appreciate her Southern drawl at the time, but since I live down South now, I miss it!

ABC/Great States also operated the LaGrange as well since the early 1970s.

It’s been closed for quite some time because of COVID. No word on when it’s going to re-open.