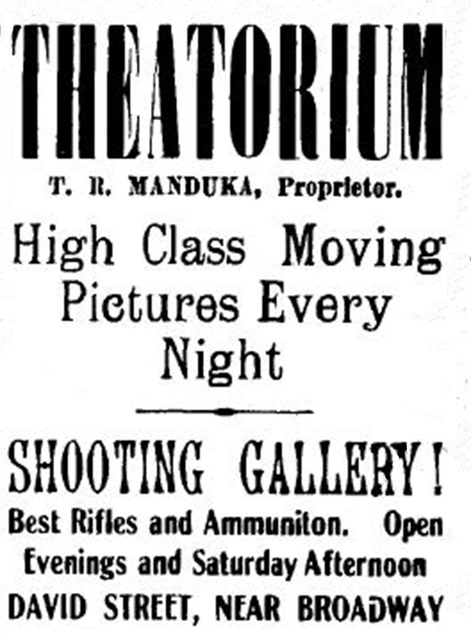 A conversion of a livery stable, the Theatorium Theatre was opened by the early half of 1908. It is listed in a 1909-1910 city directory under moving picture theatres. The proprietor at that time was P. J. Monaghan. The Theatorium Theatre was still operating in 1914-1915. Alterations were carried out in spring of 1915 and it reopened as the Strand Theatre on April 6, 1915. It is shown on a 1919 Sanborn map as not being in operation.

The May 22, 1915, issue of The Moving Picture World said: “Extensive alterations and improvements have been made to the Theatorium on David Street. The house has been renamed the Strand.”

The Strand held its “Grand Opening” on Tuesday April 6, I’ve upload an ad from the April 3 issue of the South Amboy Citizen. The October 16 issue of The Moving Picture World advertised a “fully equipped moving picture theater” located at 120 David St., South Amboy, NJ was for rent “real cheap”, saying the owner was “kept away on account of business”.

This theatre can be dated to at least the first half of 1908, it appeared as the Theatorium on that year’s Sanborn map, which was released in July. A look at the 1901 map indicates the building started its life as the livery for the hotel next to it.

I am also uploading an ad from March, 1911, this was its standard ad that year. The proprietor at that time was Theodore Manduka, who apparently also ran a shooting gallery either on or next to the premises. By late 1914, Mr. Manduka had given up his proprietorship to manage the town’s other theatre, the Empire.