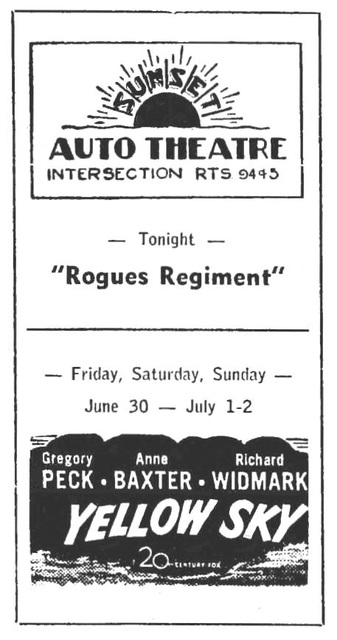 The Sunset Auto Theatre opened on July 10, 1947, featuring 1946 western “Canyon Passage” with Dana Andrews, Brian Donlevy, Patricia Roc and Susan Hayward. It was built and operated by James Frost and Robert Saurer from Orrville, Ohio. Its parking ramp could hold 250 cars. In April of 1949, the drive-in got sold/leased to Ernest Plitz from Cleveland, Ohio. The reason why they sold it was, because both of them had full time jobs during the day, they found it to be a grueling experience working each night and they did not want to repeat it. Apparently, Plitz only operated the Sunset Auto Theatre for one year as he was listed as the manager of the Star View Drive-In, in Norwalk, Ohio, in 1950. Robert Saurer returned back to the drive-in for the 1950 movie season. It closed for good in September of 1950. The property remained vacant for several years. There is a house on the property now.