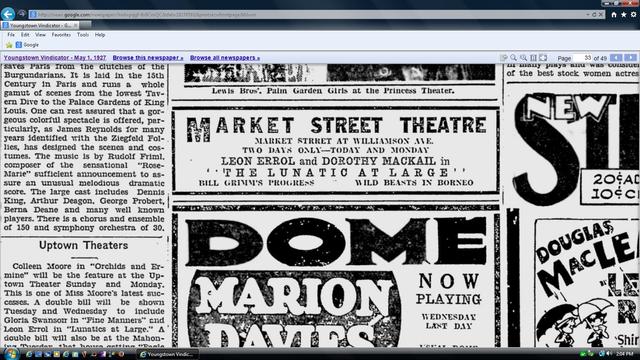 The Market Street Theatre was opened September 10, 1914. It seated 600 and was no longer listed in 1930. In the early-1940’s it was taken over by Youngstown Playhouse, and they were housed in the building until they built a larger theatre off Glenwood Avenue in the 1950’s.

Items about a remodeling job at the Market Street Theatre appeared in the May 20, 1916, issue of The American Contractor. The project was designed by local architectural firm L. Boucherle & Son. Louis Boucherle and his son Paul established their partnership in 1911, according to the February 15 issue of The American Architect that year.

The listed address above is wrong. The exact address as shown on the Sanborn Fire Insurance was 1427 Market Street, NOT 479. SEE MAP IN PHOTO SECTION.

What made the Market Street Theatre unique was the fact that unlike other neighborhood theaters, it was fully equipped to present live shows … a large stage that was fully outfitted … and dressing rooms, and was managed by a member of the Shagren family who was heavily involved in theaters all over the city including the Grand Opera House; the Park Theater; the Strand Theater; to name a few. One of the Shagren’s would join the Warner brothers by becoming manger of a number of Warner stars.