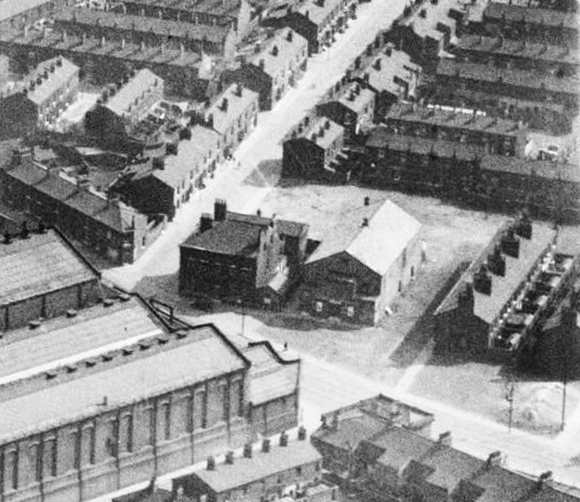 This cinema was located on Gorton Lane approximately opposite the junction with Preston Street, in the east Manchester district of West Gorton. The site is now part of the Gorton Parks Residential Nursing Home. One source quotes 1912 as the opening year with a change of name in 1929; and questions whether the name-change accompanied a rebuild.

The KYB 1931 listing is strange. There are two, brief, entries: one is the King George V Picturedrome which now has Electrocord sound; and the other is the Plaza Cinema, West Gorton, with BTP sound and operated by Amusall’s Ltd. This implies ownership changed around this time; with a name change and an upgrade to the sound installation.

KYB 1935 has a single entry, which is for the Plaza Cinema in West Gorton operated by Amusall’s Ltd. with bookings by F. Rigg of Parsonage, Manchester. There are a staggering 893 seats. (If you’re thinking ‘two halls’, read on.) The information is repeated in KYB 1937, but the seating has fallen to 640. For the first time the phone number is listed: “East 0425”.

KYB 1942 lists the Plaza Cinema, with the East 0425 phone number, as being on Gorton Lane. Amusall’s Ltd. are listed as the owners with offices at Orme Building, Parsonage, Manchester. They also do the bookings. Seating is still 640.

In KYB 1950 the Plaza Cinema on Gorton Lane with phone number East 0425 is owned by Almeda Cinema Enterprises Ltd., Bolton. Bookings are by J. Hill “at Manchester”. BA sound has replaced the BTP installation. Seating is now down to 540. This falls to 522 in KYB 1954 and there are new owners: Midland Cinemas (Darlington) Ltd, but bookings are made in Whitehaven, Cumberland, by Bramford Brothers.

The Plaza Cinema was closed in 1957. It was used for several years by Smethurst Organ Builders, and has since been demolished.

The variations in seating accommodation may be because much (most?) of the seating, at least in the 1930s, was on benches, not individual seats. It becomes a matter of judgement how many you can squash onto a bench!