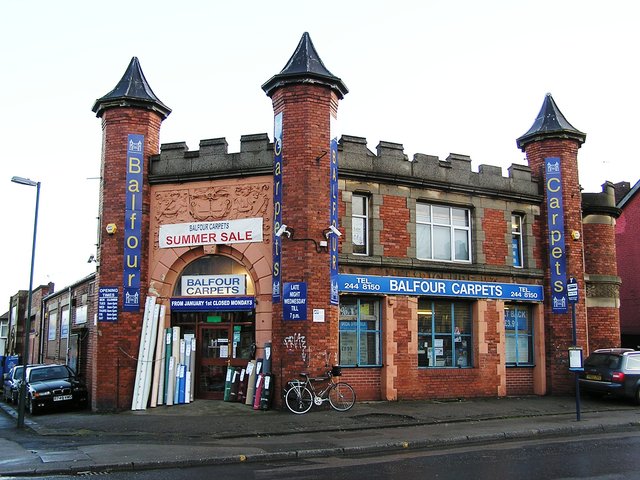 The mock-fortress building with pinnacles that was originally the Darnall Picture Palace still stands at the corner of Staniforth Road and Balfour Road in Attercliffe, Sheffield. It now (in 2014) houses Balfour Carpets & Flooring, whose website acknowledges the building’s original purpose.

Hallamshire Cinemas Ltd. opened it on 19th July 1913. The auditorium originally had seating for 750, all on a single floor. In 1920 a balcony which was built at the rear of the auditorium, not overhanging the stalls, increased the seating capacity to 966. It is listed in KYB 1928 which confirms Hallamshire Cinemas Ltd. of 18 York Street as the owners, with a resident manager J. Stevenson. Films were booked at York Street.

In KYB 1931 there’s Western Electric sound and a mention of an 8ft deep stage and two dressing rooms. The stage gains an extra 2ft in KYB 1935, where the depth is 10ft; and the proscenium is 30ft wide. The cinema is listed as the Balfour Cinema. The sound system, seating and proprietors are the same, though the latter have relocated to 3 Hartmead, Sheffield. KYBs 1937, 1942, 1945 and 1947 have the same information. ( The owners' address is “3 Hartshead” in KYB 1942 and after.)

The name reverted/changed to Darnall Picture Palace in KYB 1950, other details staying the same. This was repeated in KYB 1954.

The last show was on 28th February 1959: “Winchester 73” with James Stewart; and “East of Java” with Shelley Winters. The building was acquired by Clarks of Retford for their dry-cleaning and laundry business; and later by the carpet business currently (2014) in the premises.

The name of the stretch of road down the side of the cinema has changed at some time: from Balfour Road to Shirland Lane. The lane originally joined the road in a T-junction at the rear of the cinema. Balfour Road is now blocked at that point and Shirland has a sharp bend and runs down to Staniforth Road. The change must have been in recent decades.

Down the side of the cinema, Shirland Lane (formerly Balfour Road), there is an impressive mini-façade, at the end of the auditorium side wall, with a blanked-off rounded arch entrance. Presumably this was a separate entrance for patrons of cheaper seats nearer the screen.

Much of the interior remains in the current use as a carpet showroom. Floor levels have been altered but its cinema past is clearly evident.

Ian – one would never have guessed that such a richly detailed ceiling could be found inside an externally-looking drab, small, back-street cinema. Even more amazing is that it survived all those years when it was a laundry and dry-cleaners. Worthy of listing, I reckon.