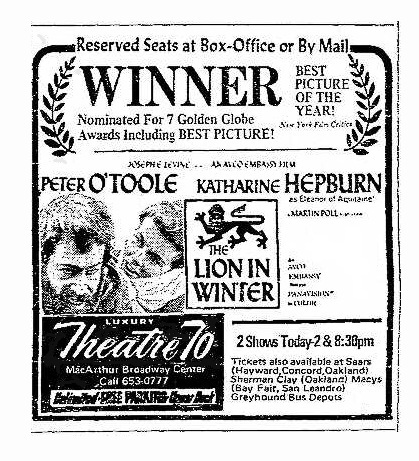 The Theatre 70 opened November 22, 1966 with Michael Caine in “Alfie”. It was part of the MacArthur-Broadway shopping center and was a rather spacious and surprisingly plush theatre.

It was subsequently renamed Cinema 1, but closed somewhat abruptly on September 29, 1977. It was eventually absorbed by the shopping center for expansion (though the restrooms were incorporated into the center).

Theatre 70 was the original name of the Cinema 1.

It was named the Cinema 70 because they showed first run engagements in 70mm format in the 1960’s.

This was a very plush theatre when it opened. It was called Theatre 70 and was the first theatre built near downtown in 30 years. I saw Love Story there in 1970 and it played for a very long run. It was built for exclusive runs and when booking patterns changed to wide release the theatre went into decline as well as the shopping center it was in. Brucec

This was a great house (at least for its era). Among others, I remember seeing The Graduate here.

The former MacArthur-Broadway Shopping Center is being leveled (and has been in stages) for some time now, after a long period of dormancy at least part of which it was used by Kaiser Permanente. Recently that demolition extended to the section where the Cinema 1 once stood. So officially, the Cinema 1 has been demolished.

when the theater opened as the Theater 70, I wondered if the theater would survive. It was very plush inside, with red velvet walls, thick carpeting. It had a elegance, that was unusual for the neighborhood. I’d say about 6 to 7 blocks away, the neighborhood was rough, with drug dealing and prostitution. It hit the news in the early 70’s that the crime was so bad that extra patrols were being added. By the time it changed to the Cinema 1, crime finally reached the theater area and the shopping mall, to the point that no one even wanted to go to the neighborhood. Cars were being stolen, broken into.

The MacArthur/Broadway Shopping Center opened theatreless on September 9, 1965. The M/B had space-port parking, you could take the local astro-bus and head up the space ramp to futuristic wonderment. (Well, as futuristic as a Woolworth’s as the only mall anchor gets.) And a year later, the Theatre 70 luxury theater opened November 22, 1966 with the film “Alfie.” With 70mm presentations in vogue, the theater name made sense.

As the theater faded and showing double features, the refreshed its name to distnace itself from 1970 and 70mm film becoming Cinema 1. Just 11 years later, the theater closed with “Greased Lightning” and “Norman, is that you?” on September 29, 1977. In 2009, the entire M/B was demolished and replaced by Kaiser Permanente.