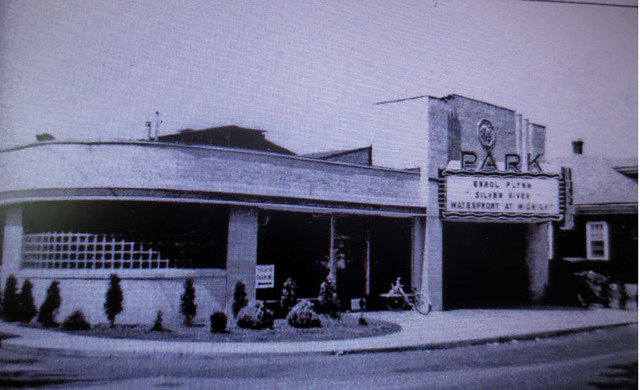 The Park Theatre was opened around 1946. Listed in the 1956 and 1957 editions of Film Daily Yearbook as the Neponsit Theatre. Lovely Art Deco style theatre that served a local community in East Walpole for several decades before the Peggy Lawton Bakery bought the property in 1962. By then, it was in a rather sorry state because film studios were hurting and theatre attendance suffering.

The building was not actually demolished as is stated above.

The bakery operated out of it beginning in 1962, shortly after it closed. (I watched 101 Dalmatians there in 1961)

In 1964, there was an attempt to destroy the building resulting in a great deal of damage, but the building was rebuilt and expanded out the back. There are accounts that imply the entire building was destroyed or demolished but that was not the case. In fact, the theatre facade with the masks of tragedy and comedy above the door was still visible for many years and well into the 1970’s if memory serves. A luncheonette operated out of the left side with the glass block windows well into the late 60’s eventually closing and becoming part of the bakery. The building was expanded and a second floor added, and eventually a new facade was erected covering over the remainder of the front. If you pass, you will still see the basic shape of the double doors on the right side of the building. One of the offices is in what was once the projection booth.

The Park must have opened after 1941 because it’s not listed in the MGM Theatre reports. There was an earlier movie operation in East Walpole which is listed in the 1927 Film Daily Yearbook. It was Bird’s Hall, address not given, 200 seats, open 2 days per week.