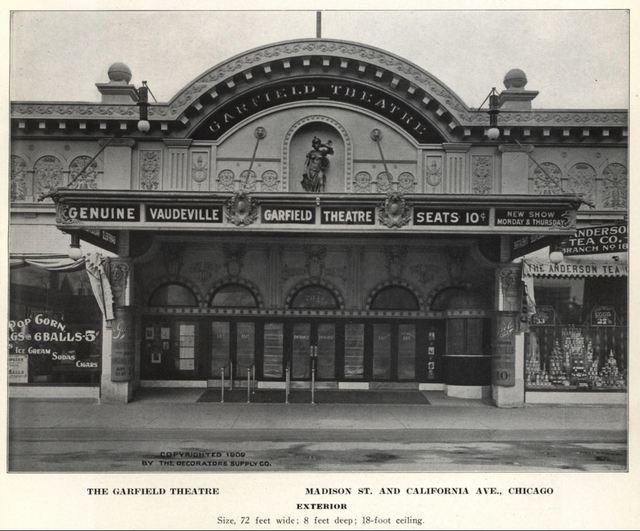 Located in the Garfield Park neighborhood, near the intersection of Madison Street and California Avenue, the 700-seat Garfield Theatre opened in 1909, and may have been a vaudeville house in its early years prior to switching over to movies. Seating was later reduced to 450.

The Garfield Theatre closed by about 1950, due to both competetion from television as well as the beginning of the decline of the Garfield Park neighborhood. The theatre has since been torn down and the site is now a parking lot.

A smaller theatre of the same name, located at Halsted Street and 55th Street, near Garfield Boulevard in the New City neighborhood, was long ago closed and demolished.

The July 15, 1911, issue of The Moving Picture World ran an article called “Chicago Picture Shows” which featured brief reviews of a number of the city’s movie theaters. This is the paragraph about the Garfield Theatre:

“The Garfield Theater, at Madison Street and Francisco Avenue, is another modern house devoted to photoplays. A big electric sign outside announces ‘Photoplays and Songs,’ and another sign below the canopy tells you to ‘Enjoy yourself. We provide the show.’ One can enjoy himself here, all right. The picture on the curtain is very good, the seats comfortably and roomy, and the music excellent. The house seats 740, and though it was a hot night, only a few seats were vacant, showing that the neighborhood had learned to appreciate good pictures. Service is licensed, much like that of the Bell Theater, 2, 7 and 20 days. The light was well handled by Operator Halliday, though a better and brighter picture might be secured if an aluminum curtain were used, as the throw is pretty long and the picture by no means small.”

The “Chicago Letter” in the September 16 issue of MPW also mentioned the Garfield Theatre:

“It is most gratifying… to note that pictures are retaining their hold on most of the managers who were obliged to throw vaudeville overboard during the summer. The Crystal, on North Ave.; the Garfield, on West Madison Street; the Lyceum, on Cottage Grove Ave., and the Oak, on Armitage Ave., all formerly vaudeville houses, with over 700 seats, are continuing pictures, being well satisfied with their summer profits.”

By the end of 1913, the Garfield Theatre was one of three houses being operated by Charles J. Schaefer. The January 24, 1914, issue of MPW noted that he had just opened the Keystone Theatre (renamed the Mode Theatre in 1935) on Sheridan Road. He also operated the Lyceum Theatre (probably the one on Cottage Grove, though the article didn’t say.)