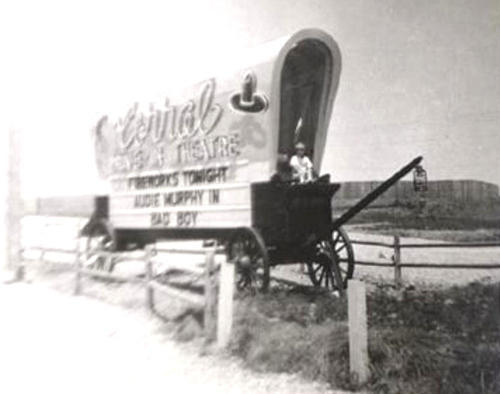 The Eldon Drive-In was opened in 1947. The car capacity was 275. The theatre was owned by James Fleener. Around 1953 it was renamed Corral Drive-In and was still listed as open in the late-1970’s.

Found it. The Drive-In was located just south of town on Business US 54 just north of W 19th Street. You can still see the outlines of the ramps. https://goo.gl/maps/XOf4k

Where the screen was located is now Eldon Bowling Lanes.

Burlingame Road is the entrance road. West 19th Street is the exit road.

Eldon’s “Drive-In” made its first appearance in the Film Daily Year Book’s 1947 edition, one of only four drive-ins in Missouri. But it didn’t show up in the Theatre Catalog until its 1952 edition, listed with a capacity of 300 and owners Tom Edwards and Frank Plumlee. By the 1955-56 edition, the name had changed from the Eldon to the Corral.

The Motion Picture Almanac, often slow to notice change, only began including the drive-in in the 1953-54 edition and switched from calling it the Eldon to the Corral in its 1960 edition. All MPA drive-in list mentions:

The name change must have happened by 1953, based on this note from the Aug. 15, 1953 issue of BoxOffice: “Word comes from Eldon, Mo., that Mr. and Mrs. Bill Fitchpatrick have assumed their duties as managers of the Corral Drive-In and Ozark Theatre in the city for Tom Edwards. They are successors to Bill Smith, who resigned recently to take his family to California.”

Corral owner Tom Edwards had a side hustle, as noted in this June 6, 1960 note in Boxoffice: “Larry Bichele of American International Pictures called on Tom Edwards at Eldon, Mo., and found Tom getting his Monkey Jungle, which he operates in connection with his drive-in theatre and gift shop, ready for the tourist season.”

Wow, that took forever! The Dec. 10, 1962 issue of Boxoffice included an announcement that the Corral Drive-In of Eldon MO had finally joined the Theatre Owners of America. “The Corral Drive-In is owned and operated by Tom E. Edwards of Eldon.”