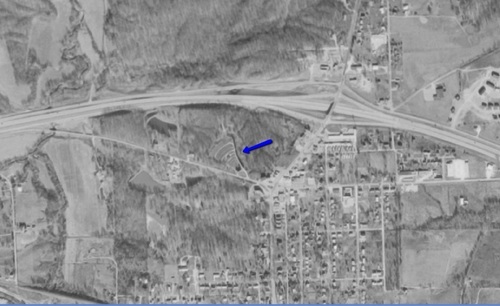 Veteran Warrenton, Missouri movie-man William Zimmerman launched the Moto-Vu Drive-In Theatre on August 17, 1950. “Take Me Out to the Ball Game” opened the drive-in.

The address for the drive-in is 101 E Veterans Memorial Pkwy, Warrenton, MO.

Today, the property is empty and there is virtually no trace that a drive-in ever existed in that location. http://tinyurl.com/qzbmtrc

The address listed is incorrect.

Entrance is now Auto Zone at this address.

“The Motovu Drive-In at Warrenton has been leased by its owner, State Representative William T. Zimmerman to Mr. and Mrs. Lowell G. Sprick, who plan to reopen it for the season April 1.” — BoxOffice, March 7, 1960

Motion Picture Exhibitor, Jan. 10, 1962: “The Moto-Vu Drive-In, Warrenton, Mo., is being dismantled, and reports are the property will be used as a trailer court."

Motion Picture Exhibitor, April 18, 1962: “Eugene Tacke will build a new drive-in at Warrenton, Mo., on the site of the old Moto-Vu, which was razed last year.”

Motion Picture Exhibitor, Aug. 1, 1962: “Mr. and Mrs. Eugene Tacke who operate the Vita and the Moto-Vue Drive-In, Warrenton, Mo., have written to friends here saying they are vacationing in Minnesota and will not return until October when they will reopen the Vita.”

I’ve literally driven past this spot hundreds of times and never realized there was once a drive-in there.

Actually appears to have closed after the 1965 season.