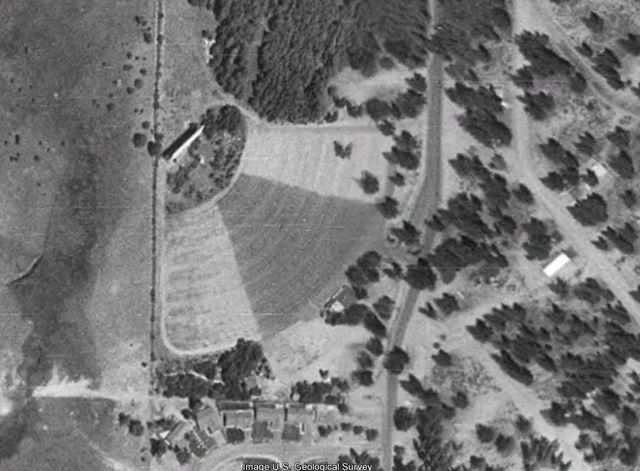 This was the second drive-in at South Lake Tahoe, opened in 1957 and closed 1984. First owned by Steve Myers & Bill Garren, then sold it to Robert Retzer & Willis Tomlinson in the 1970’s. They ran the Tahoe circuit as T&R Theaters. Around March or April of 1980, it was purchased by Luxury Theaters.

Because of Lake Tahoe’s elevation of 6237 feet, the drive-in season was short, June to September usually.

By 1984, the theater had ran out of gas and attendance was at an all-time low. About 10-20 cars a night. The final show was September 3, 1984 with “Oxford Blues” & “Footloose”. The local paper did a front page story on its demise. “We are thrilled to death to unload that turkey” says Margaret Reynolds of Luxury Theaters. It was a summertime nightmare, rampant vandalism and a party atmosphere were a common occurrence. All the kids peeled out at 3am which the neighbors didn’t like.

It’s rather ironic that the drive-in lasted as long as it did. Most of the later day advertisements that I saw had programming that repeated the first film. So they could have stopped some of the rowdiness with a standard double-feature.

It was proposed that the city of South Lake Tahoe buy the property and use it to expand the nearby Bijou Golf Course. That never happened and the land has remained vacant until 2014 when construction popped up and a MacMansion was built on the site.

When this drive-in was built in the 1950s, it stood alone in a totally undeveloped area more than a mile from US Hwy 50, the local artery. A long, unpaved road with frequent signage directed you to the theatre “way out in nowhere.” That long dirt road eventually was paved and named Glenwood Way, now serving the large residential area which ultimately contributed to the drive-in’s end.

The theatre had a 2-story yellow-and-white frame building at the rear of the lot which housed the snack bar and rest rooms downstairs plus the projection booth upstairs. Arson vandals destroyed the closed theatre’s building.

A new huge “McMansion” has been built privately on the drive-in site and is rented-out to large groups.

Credited images added found on the “You are probably from Lake Tahoe if…..” Facebook page.