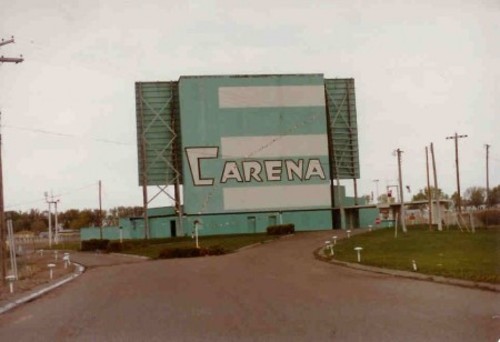 Terry’s Carena Drive-In was opened by 1952 when it was operated by Terry Carpenter. Car capacity was listed as 600 cars. It was later operated by Commonwealth Theatres. The drive-in closed in the mid-1980’s and was demolished in the 1990’s.

The Carena Drive In and Biggers Drive in were two completely different Drive Ins. Biggers was in Scottsbluff across from the Sugar Beet Factory where as The Carena Or “Terry’s Carena Drive In” was in Terry Town. The Carena was built by “Terrible” Terry Carpenter with bricks from his own sand pit.

Chris 1982 is wrong on a couple things. The Carena was in Terrytown which lies between Scottsbluff and Gering. It is often aligned with Gering however. The picture of the Carena is somehow credited to Chris, I took the photo in the late 1970’s. Brian C

The address I gave is correct according to 1962 and 1963 aerials. This theater was never actually in Scottsbluff. Upon further research, Terry Blvd. in Gering is in fact named after Terry Carpenter who built the Drive-in.

Why the name Carena?

While it’s true that the Carena has a Gering postal address, municipal boundaries show that it is completely within Terrytown. Which is to be expected; Terry Carpenter founded the drive-in and also incorporated the village and named it for himself.

Boxoffice, Jan. 1, 1962: “Commonwealth Theatres, with headquarters in Kansas City, has taken over the operation of the Midwest, Bluffs and Oto theatres in Scottsbluff, Neb., as well as Biggers Drive-In and Terry’s Drive-In theatres.”