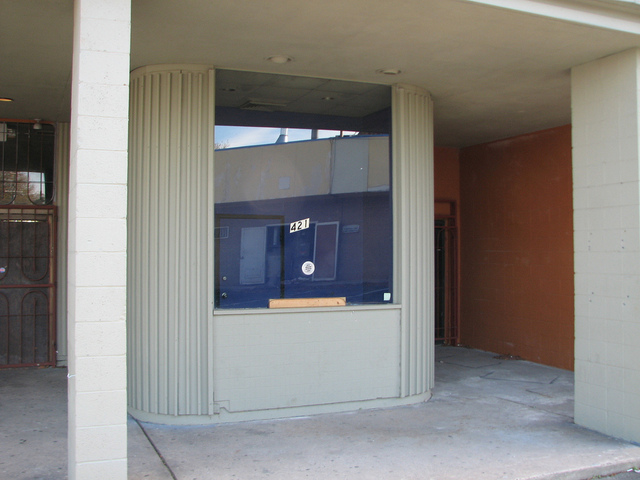 This theatre was located in the back of the Tyron Mall Shopping Center at the intersection of N. Tyron Street & Sugar Creek Road. The Tyron Mall Theatre was Charlotte’s second Ultravision theatre (after the Park Terrace Theatre), and the last single screen theatre to be built in Charlotte. The Tyron Mall Theatre upon it’s opening was an ultra-modern showplace of charm and beauty, with its luxurious seating, full stereophonic sound and spectacular Ultravision screening. This cinema was beautifully designed both inside and out under the ABC Southestern Theatres banner.

The Tyron Mall Theatre’s premiere attraction was Paul Newman and Lee Marvin in “Pocket Money” on March 24, 1972. By 1974, a second auditorium was added to the original building making it a twin. It was renamed Tyron Mall I & II Theatres on December 25, 1974 with James Caan in “Freebie and the Bean”. By 1983, the original auditorium was split down the middle to add a third screen, and on April 13, 1984 the second auditorium was also split down the middle, making it a four screen multiplex with shoebox auditoriums and smaller screens, each with 350-seats. By 1989 it went from showing first run features to becoming a second run discount movie house until the Tyron Mall closed in 1996.

By May 2022 it had been renovated and converted into a live music venue name Blackbox Theater.

There was a movie theater that closed in the 1990s that was located next to Tryon Mall (now Asian Corner) but was located in a building that is now tucked behind a laundromat/dry cleaners. It was accessed via the Sugar Creek side of the mall near the intersection with Raleigh St.

FYI: Charlotte was absent from the state of the art format SENSURROUND system for the Tryon Mall 1 & 2 showing of the film “EARTHQUAKE!” that originally opened on December 21,1974.

The SENSURROUND system was in two theatre in the state of North Carolina that had it for it’s showing of the film EARTHQUAKE!

**Charlotte was absent from getting SENSURROUND since it was only available in select cities.

I frequented this theater quite a bit during the 70s and 80s, mainly because it was the closest theater to home. I recall it’s original state when it was run by ABC Theaters. When I was 8, my dad too me to see “Superman The Movie” – on January 1, 1979. I also saw “Oh Heavenly Dog” and “Brainstorm” at Tryon Mall.

They ran the summer kids movie program that my elementary school sold tickets to. Saw some odd stuff that I never would have thought to see in a theater that way, like “A Man Called Flintstone” and even “Born Free.”

It also counts as the only theater I ever rode my bike to to see a movie (I believe it was the 1985 version of “Brewster’s Millions”). This was during its unfortunate 4 auditorium + video arcade phase, but it was only a dollar. And although I don’t recall what movie I was supposed to see, I remember sneaking into “Jo Jo Dancer Your Life is Calling” in the theater next to it. When you’re 15, and you sneak into a theater to see an R-rated movie, make sure it’s not a drama/bio-pic.

I miss the old place – even the house I grew up in nearby has been leveled – but the area really went downhill and never seemed to recover. Looking at the picture when it was some sort of nightclub, I couldn’t help but notice how bad the pavement looks. It was bad back in the 80’s too. In fact, I once hit a pothole in the parking lot (behind the mall, where some nightclub used to be, but was already long gone) and it broke a battery cell. The fact that it has never been repaired tells you how much the area has been left to rot. It’s too bad. I used to enjoy this area in my childhood.

I was the manager of the Tryon Mall Theater when it twinned in 1974. I remember well when we opened on Christmas Day with Freebie & The Bean.

Grand opening ads posted. It was the last single-screen cinema to be built in town (except adult cinemas). 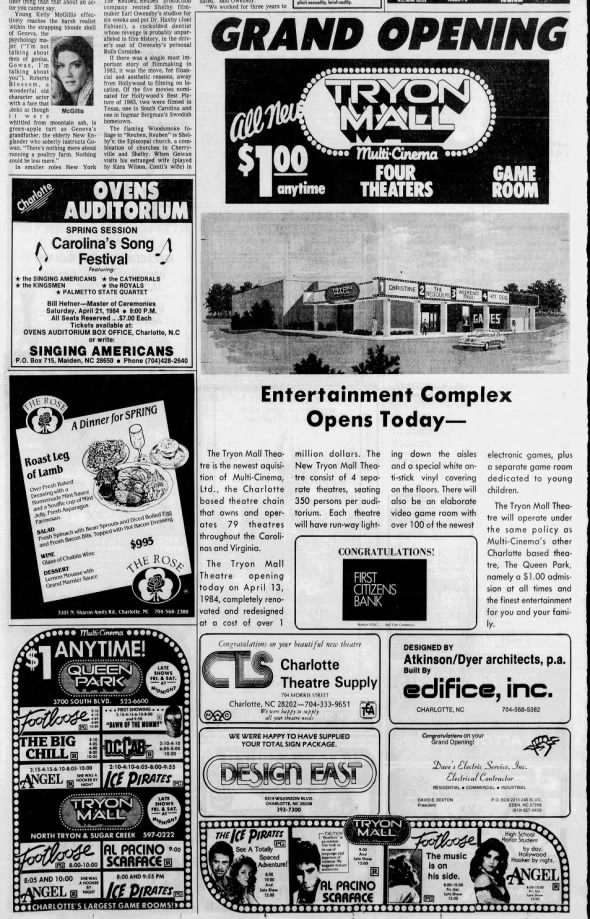 This became Sugar Creek Cinema on May 9th, 1997 and listings disappeared in December 1997. Another ad posted.

This property is currently being renovated and turned into a music club. Has already had some shows and will be a full-time music venue.