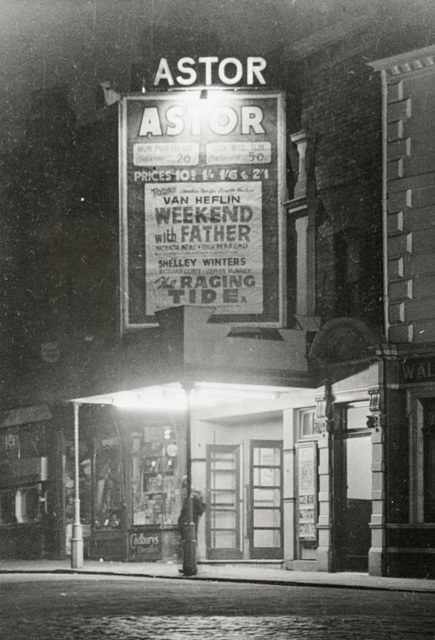 Originally on this site was the Grand Theatre which opened in 1869. It was demolished in 1904 and the Empire Theatre was built on the site, opening in 1905. Films were shown here as part of the variety programme from 1908. It was later re-named Hippodrome Theatre.

In 1931 the Hippodrome Theatre was re-modelled and converted into a cinema by Harry Buxton. It was equipped with a Western Electric(WE) sound system. It was taken over by the Associated British Cinemas(ABC) chain in 1932. In January 1938, ABC had opened their new Ritz Cinema (built by Union Cinemas), and the Hippodrome Theatre was taken over by an independent operator and reverted back to live theatre use.

On 3rd December 1951 it went back to full time cinema use, re-named Astor Cinema. It was taken over by Orr Entertainments of Coventry. It was badly damaged by a fire in April 1960, and never re-opened. The final film screened was Dick Miller in “A Bucket of Blood”. The building was demolished in 1965, apart from the façade, which was demolished in 1968.

The final film showing on the night of the fire was ‘A Bucket of Blood’!