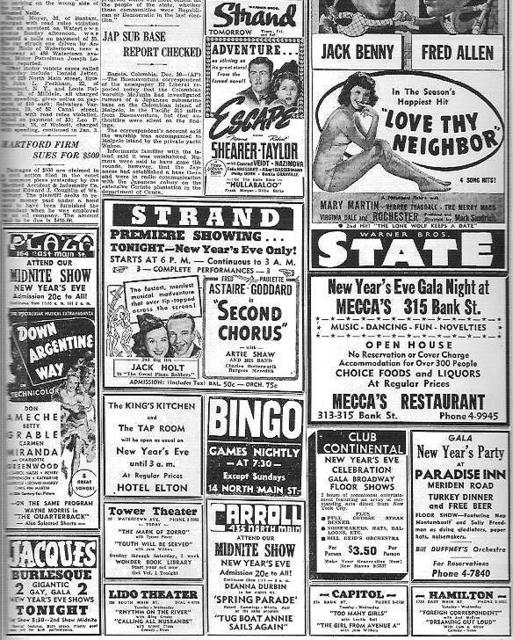 A first run theater which was near the Loews Poli Palace Theater on E. Main Street in Waterbury for decades. The State Theater opened on March 30, 1929. By 1941 it was operated by Warner Bros. Circuit Management Corp. The theater was renamed the Rosalind Russell State Theater, in honor of the Waterbury native, when she and co-star Eddie Albert appeared in person for the world premiere of their movie “Girl Rush” in August 1955.

The city put a bronze plaque on an outside wall of the theater to commemorate the event. Unfortunately, Hurricane Diane hit Waterbury with torrential rain the day of the premiere, and the State Theater (and much of downtown Waterbury) was under four feet or more of floodwater the next day.

Powimage suddenly stopped functioning a few weeks ago. The State Theatre marquee and plaque photos are now at: View link

The organ at the State Theatre was a Wurlitzer Style 205 with 2 manuals and 10 ranks of pipes. It is currently installed in a home in Massachusetts.

The Naugatuck Valley Mall Cinema I, II and III ran the downtown theatres out of business. After The State Theatre closed, the LaFlamme Family purchased the downtown theatre renaming it The Center. They had great success with “Adventures Of The Wilderness Family”. Most of the movies were Kung-Fu type films and awful things like “Snuff” and other violent movies.

I’ve been told that my great-grandfather’s brother was a purveyor of this and other theatres in the New England area.

I remember the days I worked at the State Theater..Way back around 1953…I was an usher..for a short time..the head usher left and I was made head usher…Julia Smith the boss.. her husband was Mr. Zolo…She was very strick…but fair…her rules had to be obeyed
A lot of memories… She had two Boston Bulldogs that I had to walk every day…The ushers had to stand at each aisle with their hand behind them..

On Saturday matinees..when the kids were to noisy.. in the balcony
she would turn on the lights and open the exit doors and put everyone out…does anyone remember this…. I do…She ran a tight shift…She was always very good to me… some nice memories of the State Theater…I have a lot more.. but someday I’ll write more….

The Rialto Theater and Moriarty’s Buildings in the 1920s

Florence Stevenson Carosello (1898-1987)played the Wurlitzer at this theater from the late teens until talkies. I had many conversations with her in the 1980s in her home in Norwalk, California.

She remembered the Wurlitzer technician coming in by train from New York to attend to repairs and said a Mr Murphy was the theater manager. I believe she was in a union as she said Mr Murphy always made sure she took her mandated breaks.

It was fascinating to see her c.1917 Connecticut driver license embossed in aluminum.

Correction: Mrs. Carosello died in 1988. Her brother-in-law, Joseph Carole, had a hit play on Broadway(1942-44), “Separate Rooms”. Alan Dinehart, Glenda Farrell and Lyle Talbot were in the cast and Charlie Chaplin and Paulette Goddard attended opening night. Joe Carole was a writer at Columbia, but got fired by Harry Cohn, as he defied him and went to NY for the play’s premiere.

Joe must have gotten back into Cohn’s good graces as he co-wrote Marilyn Monroe’s first movie, “Ladies of the Chorus.”