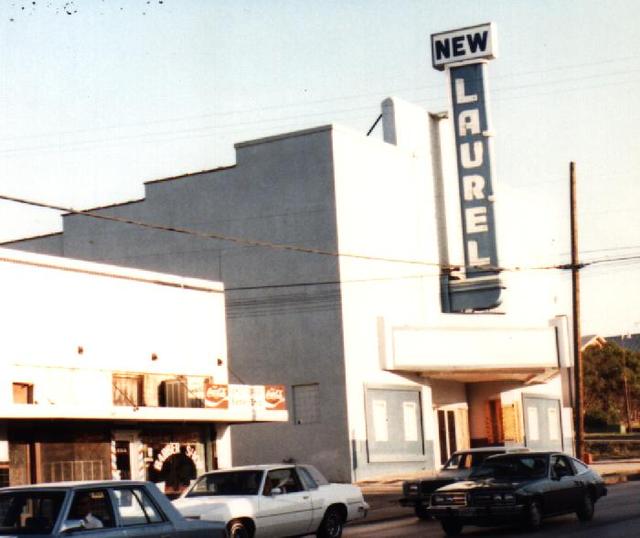 As a kid, I loved going there as it was in a residential area, close by, across from a middle school. It also had a balcony. It was an independent movie house worth remembering, rare now in these days of big chains.

His name was A.C. and he used to take me to the theater all the time when I was a kid, my sisters and I would sit up in the balcony, which was usually roped off and watch movies. I can’t remember how many times I saw Rocky and The Pink Panther movies. I believe they showed Rolling Thunder there as well as One flew over the Cuckoos Nest and Carrie, he did let us watch the end of Carrie when she reached up from beyond the grave. I think they also show The Exorcist there, but he wouldn’t let us watch that one, we left SA in 78 and I was 9 yrs old, so you can see why he wouldn’t let us watch certain movies. I remember going with him to Mr. Braha’s office and there was another guy with silver hair, can’t remember his name right now. I have vague memories of The Aztec, my memories are mainly of the New Laurel, I remember he brought home a lot of promotional stuff, t-shirts, 45’s posters and autographs. After watching movies in the balcony all day he would take us to the Century South to watch more movies, Jaws, Star Wars, The Incredible Melting Man, Manitou etc.

Beat City,Great story,You had it made,reminds me of a story of a friend who’s dad was a projectioinst in Tampa,During the summer my friend,Michael, would watch double features everynight on the roof of the one of the many Drive-ins in Tampa,hope your grades didn’t suffer,you lucky kid.Lol.

I worked at the Theatre for about 3 years; usher for 1 and Asst Mgr for 2. If you search other sites you can find Pictures. I was there from 1961 to 1964. Manager was Mr. Kruger. When I was Assistant Mgr. I made sure we had the prettiest Candy Girls (Concession Stand) in town… LOL

I can remember many movies, but the best I actually loved was West Side Story. Can you believe it…. a Musical ! LOL After seeing it many times, I finally really got to enjoy. Oh, I always wore Cowboy boots, not that you would remember, lol.

When I first hired in the Manager was Mr. Blankenship. A Mr. Powers was the BIG boss over the San Antonio chain. Office was over the big theatre downtown close to the SA river.

I worked there in ‘66 – ‘68 as an usher. Alvin Kruger was the manager. Powers owned it along with the Woodlawn and Texas Theaters. Candy girls were Judy & Debbie Hedtke, Beverly Gail Kruger, her sister Becky (Alvin’s daughters), Jenny Quan and Janet Dreslin. Ushers were Wayne Sholtz (who married Beverly), Charles Barley, Steve Keller (joined the Coast Guard and maybe went to 'Nam.) Keith Hoechten. There were others I can’t remember.

I saw Gone With The Wind (over 35 times), In The Heat of the Night with Sidney Portier & Rod Steiger (Academy Award Best Picture ‘68 & inspiration for the TV series); Wait Until Dark with Audrey Hepburn.; The Fox (G rated about lesbians) with Sandy Dennis and Barefoot in the Park among others.

There were windows in the lobby through which you could watch but not hear the movie. Inside the north (left) door to the main room there was a doorbell we would press if the film ran out or was out of focus. It rang a bell in the projection room.

A projectionist was O. B. Thomas who always told us jokes. Projectionists were union and kept to themselves. The projection room had steel guillotine plates over each opening for fire suppression from the old days of celluloid film.

Movies came by courier in heavy film cans the size of a suitcase. The projectionist would unwind them, splice them together into one continuous loop about 4 feet in diameter. The movie would play from that loop situated on a large turntable. The projector used a carbon arc with rods like an arc welder has. Rods were motor fed but projectionist had to constantly tweak the gap.

Across the street and north was the Budha Lounge, a gathering place for gay men. Sometimes, we had to go there to get change for the cashier. It was scary at age 16 to go in there so we usually took someone with us. The bartender would call you “sweetheart”, etc.

I think we closed the balcony sometimes when it wasn’t busy. We sometimes went into the attic to change light bulbs. The screen was perforated with large speakers behind it. The southeast corner had a compressor room for the air conditioners which was multi-level and noisy but a good place to take a break.

We got all of our pop corn from the basement of the Texas Theater. We would drive there periodically and stuff a car with hefty bags of popped corn which we would re-heat and sell. Butter was extra.

There was a marquee over the front facing San Pedro. We changed the plastic letters on it when necessary using a very tall step ladder and a spotter, late at night after everyone left.

Most of the crew were in school. We were close and often spent free time together when we had it. Steve Keller was assistant manager and our natural leader. Kruger was our surrogate Dad. We used to go to Edge Falls or someone’s house to relax together.

I went by it years ago and was sad to see that it had been razed. There was parking south of the building but also one block north— both on the east side of San Pedro. We had to patrol the parking lots as well.

Laurel Theater was my second home, my second family and I’ll cherish the memories no matter what. Sam, 2015

The Laurel, then known as the “New Laurel” was the first theatre in San Antonio to install Dolby stereo! The first movie to play in Dolby stereo was 1975’s “The Killer Elite” with James Caan.

It was a wonderful experience working there as an usher in 1950 and 1951. Mr Tom Sumners was the manager.

The hard work was carrying 100 Lb sacks of popcorn from the storage room to the concession stand, but it gave a chance to smile at the pretty girl there.

Sometimes we carried the film canisters to the projection booth from the delivery truck outside. I was always awestruck by the brightness and loud crackling sound of the arc in the projectors.

The main job was showing people to good seats, doing it quietly and holding the flashlight down low so as not to disturb other people.

I got “promoted to assistant treasurer” which meant that I totaled up the day’s cash and wrote it in the book at the end of the day. Mr Sumners then put the cash in the safe to go to the bank.

We met lots of different types of people, coming and going, and we saw many great movies. We saw them dozens of times each, so we got to know them well. I especially remember “Showboat” and “The Tales of Hoffman”, superb dramas and wonderful, powerful music.

I was in the lobby when two Catholic priests had a discussion with Mr Sumners about “Showboat”, remarking that Ava Gardner’s blouse was too low in front.

What a superb experience for a young kid, growing up.

I worked as an usher at the Laurel 1949-50. Doug Naylor and Bob O'Donnell were the managers at that time. I met my wife at the Laurel. She was a cashier. We have been married for 64 years and we have alwys thought the Laurel was part of our lives.On a serious note the there was fire in the projection booth shortly after the theater opened (1939 I think). It was during the showing of Pride of the Yankees which was the Lou Gehrig story. Film was highly flammable and something went wrong. Anyway, I remember watching “The Great Caruso” many times. Also, I recall when the Marx Brothers “A Night at the Opera” played to SRO night after night. Admission was 75 cents and popcorn cost around 25 cents. We had a kiddie matinee on Saturdays and it was a fairly rough crowd. Kept the balcony open which was probably a mistake. Lot’s of other memories like going to Sommers Drug Store on the corner having a soda or ice cream. They actually had a soda fountain which has disappeard in the USA. We have a photo showing my wife and I dancing with the Laurel superimposed in the background. We are dancing in the middle of San Pedro avenue. Lots of other memories. A comment that I read mentioned Tom Sumner as a manager. He actually was the owner of the Laurel, Woodlawn and Josephine Theaters. I think he bought the Laurel and Woodlawn from Interstate Theaters who owned the Laurel when I was there.

Closed in 1974 and reopened by new management as the New Laurel on April 4th, 1975. Another ad posted.