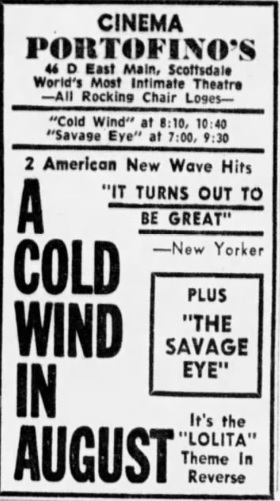 The Cinema Portofino opened on April 13, 1962, presumably as an art house, and by 1963 had started to make news with its, then considered risqué, programming. In November of 1963, the Scottsdale Progress writer criticized the policy of the Kiva Theatre that made moviegoers sit through a trailer for the film “Promises, Promises" staring Jayne Mansfield which was playing at the Portofino Theatre. “The attraction is a nude female named Jayne Mansfield who is shown in numerous provocative scenes. Miss Mansfield’s acting is not of sufficient quality to justify the picture’s existence as art. The movie is apparently nothing but sensationalism pure and simple".

In January 1964 the Scottsdale Junior Woman’s Club asked the theatre to remove the provocative posters from the front of the theatre. The theatre was operated by Louis Sher’s Art Theater Guild, which had 27 art theatres across the United States. Sher’s response was that he was giving the public what they wanted and the quality foreign films they played were a flop. The figures presented were: “No Exit” (Jean Paul Sarte) $498; and “Taste of Honey” $304. Miss. Mansfield’s “Promises, Promises” took in $3,480 in the first week (about $26,922 in 2015 dollars). After meeting with the club members, Mr. Sher removed the posters and replaced them with print only advertisementss and no pictures.

During the following years, as films got bolder, the Kiva Theatre and Portofino Theatre had periodic skirmishes with the city. In December of 1972, the Kiva Theatre started playing “Deep Throat” until the FBI seized it in July of 1973. This didn’t stop X-rated films in Scottsdale; in fact Louis Sher would say in 1990 that he had fewer troubles after that.

By the mid-1980s X-rated movies had run their course in Scottsdale and the Portofino Theatre closed.