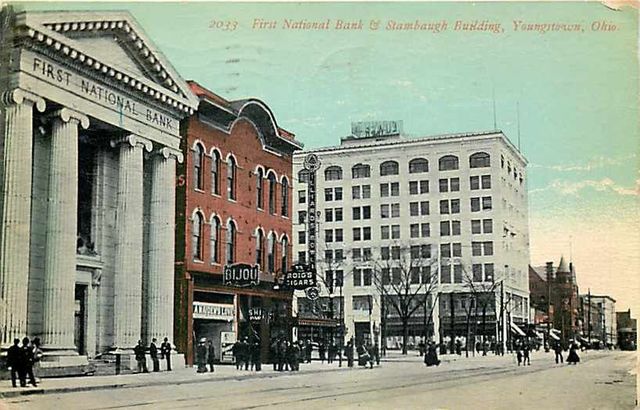 This little theater operated between 1907 and at least till 1915, but little else is known about it. If there is anyone who can provide more information, we’d be greatful.

There was also another Bijou Theatre that opened later on the corner of Watt and East Federal Streets, but the two were not related.

This was the Warner brothers first theater in Youngstown. They would later acquire the Dome Theatre before building the Warner Theater,after which the Dome was closed.

Located at 4 W. Federal, the construction on the Youngstown Bijou (originally built as a vaudeville house) was not completed until December 11, 1907. George Olnhausen originally had an interest in the Bijou, but he sold it to Buehrle & Shook of Wheeling before the theater opened. Apparently there was a conflict and the contractor who built it maintained possession. Seas & Young of Columbus and Cleveland were also involved and it didn’t actually open until the spring of 1908. By November 1908 it was changed into a picture house and was operated by Walter Hanitch. A mirror screen was installed in 1911. Paul Fitch and Walter Hanitch had it through the Spring of 1911, when it was purchased by the Robins Brothers (Harry & Daniel). The Robins Brothers held on to it through 1921, and it was gone by 1924. The Warners do not appear to have had any involvement with the exception that Anne Warner Robins' husband David M. was a brother to those who owned it. David was not involved with the theater.