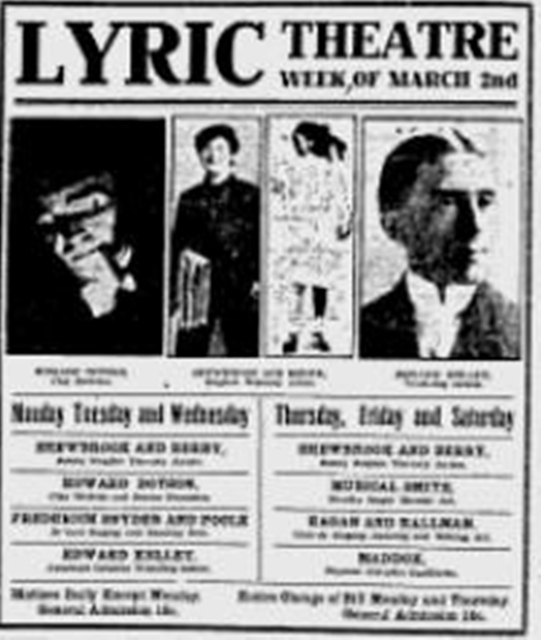 The Lyric Theatre was located on W. Federal Street near Chestnut Street in downtown Youngstown. It was opened March 2, 1908 and was still open in 1915.

Like many of the old theaters that sprang up between 1907 and 1920, the Lyric didn’t last many years, but in its day, it was popular, and ironicly one day, another theater would be built across the street that would be built by Youngstown’s theater men, the Warner Brothers and today known as DeYor Performing Arts Center/Power’s Auditorium, the home of the Youngstown Symphony Orchestra.

This theatre was located at 277 West Federal Street.

The Lyric opened March 2, 1908, and hopefully someone out there can find the date it closed because it’s difficult to use the local newspaper to try to pinpoint when it closed as the theater ads in the Youngstown Vindicator for the period between 1900 and 1920 are very inconsistent at best.

In an ad that ran on page 4 of the Sunday edition of the Youngstown Vindicator for April 5, 1908, it claimed to have 4000 seats. This ad must be questioned as to its seating capacity since to hold that many people would have made the Lyric the largest theater in Youngstown, and there is no evidence of a theater that size at that location, so if anyone might have documentation that states the seating capacity of the Lyric it would be welcomed.

4000 sounds like it might have been a typo for 400. The Lyric was a nickel theater, so I wouldn’t expect it to have been very large.

The Lyric is mentioned in the June 5, 1915, issue of Motography:

“The Lyric theater at Youngstown is now under new management. James Thomas has assumed control of the play house, and same will be entirely renovated and remodeled under his direction. Among the innovations at the Lyric are a new ventilating system and free mineral spring water for all patrons. First class pictures will be shown.”

In 1907, the annual report of the state’s Department of Inspections listed the Alvin and Lyric Theatres in Youngstown as properties of the partnership of Hartzell & Pitzer. The Alvin was already in operation, but the Lyric had not yet received a permit to open. An item datelined Youngstown, April 16, in a 1908 issue of Variety said that Hartzell & Pitzer had begun presenting burlesque at the Empire Theatre in Youngstown, and that they also operated a string of smaller theaters in the region.