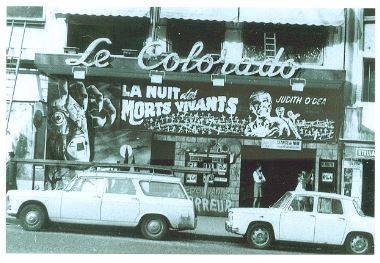 Located in the Montmartre district in the north of central Paris, close to the famous Moulin Rouge. The Colorado was opened by 1965. It screened mainly horror and exploitation films. It was still open in 1977 but had closed by 1985.

Today it operates as a live sex performance theatre known as La Diva.

In March 1977 a friend and I visited Paris to attend the 6th International Fantasy Festival at the Grand Rex. As lifelong lovers of horror films we were delighted to discover the horror-themed Le Colorado, at which we saw two double bills that were presumably typical of its fare: “Le Creature Invisible” (“The Sorcerers” [UK/1967], starring Boris Karloff, complete with English title and BBFC ‘X’ certificate!) + “Dracula, Prisonnier de Frankenstein” [1971] and “Magdalena, l'Exorcisee” ([1974] UK: “Magdalena: Possessed by the Devil”) + “Le Monstre du Chateau” ([1971] UK: “Killers of the Castle of Blood”). I don’t recall any ‘horror’ decoration inside the cinema. I just remember a relatively small single floor auditorium (and the requirement to tip the elderly usherette as she showed my friend and me to our seats, something we weren’t prepared for!). So the cinema was operating until at least March 1977.