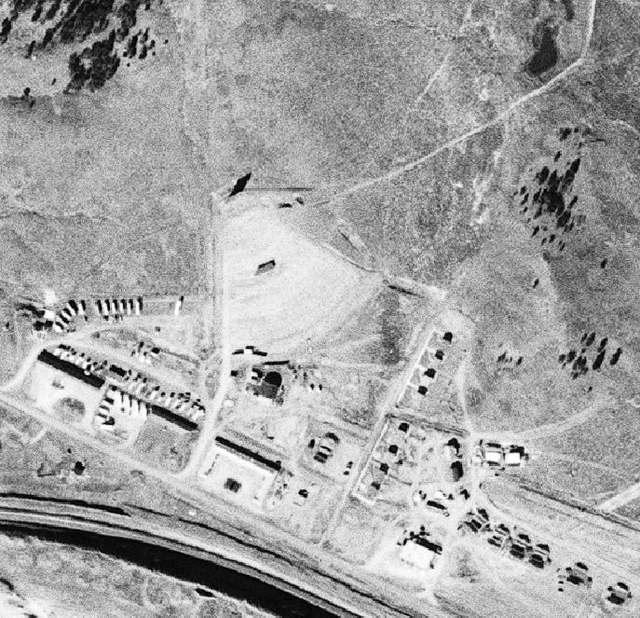 The Starlite Drive-In sat on the east side of Newcastle and was opened in July 1950. In March 1954 it was renamed Knox Drive-In having been taken over by Ted Knox. The drive-in managed to make it at least to 1979, but it was subsequently closed and demolished.

Today, Pamida sits on the property and there is no trace of the drive-in left.

Boxoffice, July 29, 1950: “The 200-car Starlight Drive-In, located about two miles south of the city on the highway toward Lusk, has been opened by B. J. Kearney, J. Edward Smith, Harry Henderson and E. Keith Thompson.”

Boxoffice, Aug. 23, 1952: “A windstorm damaged the screen and other installations at the Starlight Drive-In, Newcastle, Wyo. The wind was so strong that it not only blew away 15 speakers, but some of the speaker posts went along for the ride also.”

Boxoffice, March 13, 1954: “Ted Knox has bought the Starlight Drive-In, Newcastle, Wyo., and has renamed it the Knox, as he is also doing with his other four drive-ins in the (Denver) territory. The Newcastle ozoner, with 350-car capacity, was bought from the Starlight Amusement Co.”

In the 1956 Motion Picture Almanac, the drive-in’s name changed to the Wyo; it’s likely that it opened that way for the 1955 season. Seven years later…