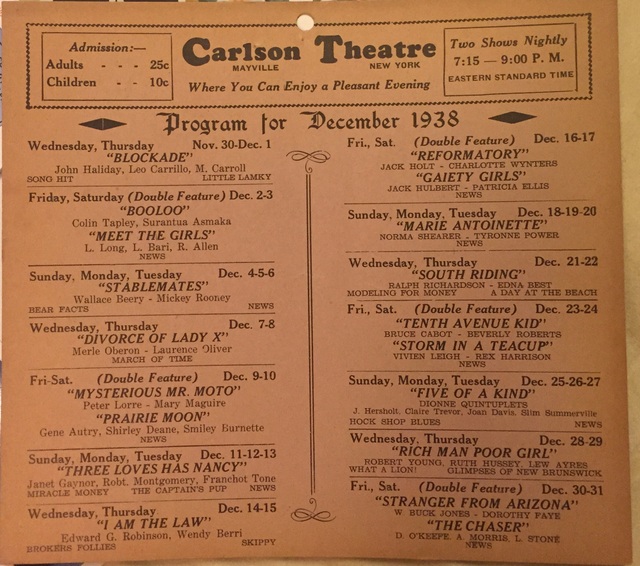 Originally opened in the 1900’s as the Swetland Opera House. It was renamed Carlson Theatre around 1933. Seated 300 according to the Film Daily Yearbook of 1940. For Mayville’s listing in the Film Daily Yearbook of 1951, only theatre listed is the May Theatre on Main Street with a seating capacity of 395 so there’s a small chance the May Theatre is the Carlson Theatre with a simple name change however we all know that almost every theatre of yesteryear decreased their seating at some point(s) over the years but I’ve personally never heard of a theatre expanding its capacity while remaining a single screen in the same building.

There’s also an even smaller chance that it was an error on the Film Daily Yearbook’s end, as any of us who have studied them long enough have all seen a couple whoppers. If anyone can verify that these were two separate theatres, a separate listing should be created for it. If not, the May Theatre should be added as a previous name. I just don’t like putting any info in CT I have not positivey verified.

I have in my possession (and will add photos of once this listing goes up) theatre calendars from 1938 meaning it went back at least that far.

The March 11, 1947, issue of The Dunkirk Evening Observer had an article about a fire in the building which housed the Carlson Theatre, but the theater suffered only some smoke damage. The article said that the theater, which was operated by Blatt Bros., was on the second floor.

That opens the possibility that the Carlson was the old Swetland Opera House, an upstairs theater dating from around the turn of the century. An ad in the December 29, 1933, Observer touted a New Year’s dance being held at the Carlson Theatre Hall, which suggests it had a flat floor, which was not an unusual feature of old opera houses in small towns. The most recent mention of the Opera House I’ve found is from 1929, and the earliest mention of the Carlson Theatre Hall is 1933, so there would be no overlap between them.

A February 3, 1949, article about Blatt Bros. in the Altoon Tribune listed the May Theatre in Mayville as the only one of the chain’s houses outside Pennsylvania. In 1950 Blatt Bros. opened the Lakewood Drive-In near Mayville. As the 1947 article is the most recent mention of the Carlson Theatre I’ve found and the 1949 article the earliest mention of the May Theatre, there is no overlap again so it is possible that they were the same house. Still, as the Carlson was an upstairs theater, it is possible that Blatt Bros. decided to replace it with a new theater.

Also, I see from the Google map that Mayville doesn’t have a street called Main Street. The main business district is along Erie Street.

These theatres were before my time though it is my understanding that the May Theatre and the Carlson (Swetland Opera House) were 2 separate theatres on Erie Street. Interesting to read about the flat flooring as the Swetland was turned into apartments years ago. Mayville is the county seat and Erie Street is the main street that travels North to South giving travelers a view of nearby Chautauqua Lake. This lake is not part of the Finger Lakes. And yes, the May Theatre should have its own page on CT. I have always wanted to enter the former Swetland building as someone’s apt. must be part of the auditorium. And there had to have been a stage. The Blatt Bros. mentioned also owned The Grand Theatre in nearby Westfield NY. The Grand is listed on CT. It was art deco in design and the architect was Michael DeAngelis.

This closed real estate listing says that the three-story brick commercial block at 34 South Erie Street, “[k]nown as the former ‘THEATER’ building….” was sold for $206,000 on January 30, 2017. The building was erected in 1910. There is one photo. There are still four storefronts on the ground floor, and the upper floors now house sixteen apartments.

Thank you, Joe. That is the building. The May Theatre was street level and to the left. Mayville is the county seat with the county courthouse and county prison nearby.

The September 9, 1950 issue of Boxoffice gives different dates than the real estate listing above does, and additional information. The headline is “Mayville Theatre Closed by Blatt” and the article says that the theater had opened in 1904 as the Swetland Opera House, with a live show featuring the young Al Jolson.

The theater was sold to A. A. Carlson around 1929, becoming the Carlson Theatre, and bought by the Blatt circuit in 1946, when it was renamed the May Theatre. The building was originally two stories, but a third floor was a dded a few years after it was built (this was probably the source of the real estate listing’s 1910 date for construction.) The 1950 article also noted that the theater had operated as a movie house for “…almost forty years.”

An April 5, 1952 Boxoffice article revealed that the house had been reopened for a while under different management, but was able to operate for only about a year. As of 1952, a plan was afoot to have the house opened again under the auspices of a local businessmen’s group and to have the actual operation handled by students from the local high school, but I’ve found nothing indicating that this plan ever came to fruition.

Patsy: Do you know if the May Theatre to the left was in the same building as the Carlson? The reason Blatt gave for closing was because new State fire regulations would have required extensive alterations to the old theater which would have been too costly. I’m wondering if perhaps one of the storefronts in the building was then converted into a small theater by the subsequent operators.